Just Waiting To Be Adopted 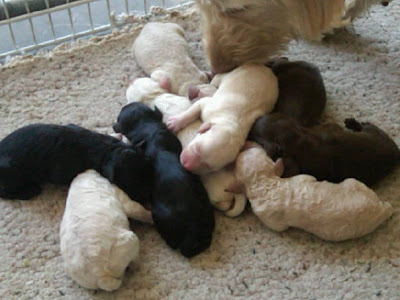 My sister's registered labradoodle, Maggie, just gave birth to nine puppies, including six males and three females. If you're interested in getting first dibs on the new litter, let me know. The females are available for $750 and the males for $700. They should be ready for adoption, vaccinations included, by October 10. Labradoodles, a cross between a labrador and a poodle, are described as "sociable, friendly, non aggressive, and extremely intuitive." They are considered to be highly intelligent and easily trained as guide dogs, therapy dogs and other assistance dogs. They have non allergic coats.
Posted by Gary R. Welsh at 12:53 PM

Since when were Labradoodles recognized by the AKC?

Mike, I'm not sure of the proper terminology. Maggie has registration papers. There is an international association that registers labradoodles. I don't think the AKC recognizes any cross-breeds, am I correct?

Some breeds that were the result of crosses have become breeds in their own right but it takes many generations to earn AKC recognition as a breed. Similar with CFA and TICA when it comes to cats.

Makes sense it would be a group separate from AKC that would recognize and register the poodle crosses.

All I know is a friend has one and it is has a personality exactly how you described, is intelligent and if I wanted a dog, I would seriously consider one.

I'm glad my daughter doesn't read this site, or I'd be in line for a labradoodle.

A friend of mine has one. He got bigger than expected and is just plain goofy! All puppies are cute, just like kittens. They are also a lot of responsibility!

They vary in size, Garyj, so it's good to inquire about the parents' size in advance. As I explained to someone else who asked, Maggie, the pups' mother, is comparable in size to a labrador with perhaps a slightly slimmer build. She is not goofy; she has a very pleasant demeanor and enjoys being around kids.