Is This Birth Certificate For Real Or Just Another Hoax? 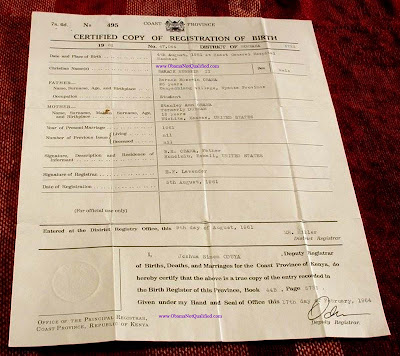 Two talk radio shows aired on Indianapolis' WIBC-FM last night, "The Big Show With Bill Cunningham" and "Coast To Coast" were buzzing over a World Net Daily report about California attorney Orly Taitz filing what purports to be a photo image of a Kenyan birth certificate of Barack Obama with the U.S. District Court for the Central District of California. The document shown in the the photo indicates that Obama's place of birth was Coast Hospital in Mombasa, Kenya on August 4, 1961. In her lawsuit, Taitz is seeking the Court's permission to obtain documents from the Kenyan government and to depose Secretary of State Hillary Clinton. The document purports to have been issued by the Kenyan government in 1964, the year it became independent from Great Britain. While the alleged document's contents are quite intriguing, I think it should be viewed with suspicion, particularly since Hawaiian officials have declared the Certification of Live Birth produced by Obama during last year's campaign showing his birth there as legitimate. The report doesn't indicate where Taitz obtained the photo image of the document. During last year's campaign, there were Internet rumors that Republican campaign operatives had obtained such a document that would be revealed during the presidential race between Obama and Sen. John McCain. Those rumors proved to be untrue. This may be a hoax to completely discredit Taitz ala Dan Rather in her pursuit of numerous lawsuits against Obama challenging his natural born citizen status, a constitutional requirement for being president of the United States. The Daily Kos is already having fun debunking the document here. Poor Orly. She means well.

If you look at the document and scroll down to the bottom, you will see on the left side the reputed embossed official seal, and under it, "Office of the Principal Registrar, Coast Province, Republic of Kenya."

Directly to the right of that seal is the issue date of the document, the "17th day of February, 1964."

The was no Republic of Kenya in February of 1964.

The Republic of Kenya did not exist when this document was supposed to be issued.

Again, I think it is another successful attempt by the Obama folks to shift attention away from the real issue concerning his NBC status, his father's citizenship status at his birth. Efforts to shift the debate to a supposed Kenyan birth place are a total distraction from the real issue. It looks like Orly fell right into their trap.

I'm glad that people are attempting to make sense out of all of this mess, but the main question at hand is that the Certificate of Live Birth that was released by Obama did not match similar Certificates of Live Births in Hawaii in 1961.

The signature at lower right looks wierd to me. Like it is overlaid onto the photo. My sense is the angled plane of the paper doesn't match the signature's and doesn't follow the crease realistically.

I think that the paper would show some age discoloration and the signature should have 'bled' but has nice sharp lines.

But the worn-through corners of each crease mark is a nice touch.

I saw Orly Taitz on MSNBC. The woman is a loon and even Ann Coulter thinks so.

She refused to ride in the car because the driver's name "sounded Muslim" and kept calling the anchors "brownshirts" for Obama.

Is this woman even an American citizen? If not, she needs to shut the fuck up.

Another interesting theory, AI. Orly, who claims in her lawsuits that Obama is not a citizen, brings forth this document which purports to be a Kenyan birth certificate. WND, which is awash with stories demanding a birth certificate, in the face of Hawaii's declaration that the Certificate of Live Birth is lsgitimate, publishes the document. And the upshot is a supposed attempt by "Obama folks" to shift attention from your strained NBC theory???

I understand your argument. I disagree. No one else is talking about the interpretation of "Natural Born Citizen". Most understand it to have mean born in the USA, not naturalized later in life. Neither the Laws of Nations treatise nor the importance it placed on the citizenship of the father, was ever adopted by either the US or before it Britan.

This is the second story (Burton before it) that has had nothing to do with the interpretation of NBC that you have twisted to somehow be an unwarranted swipe at your theory. Who's attepting to shift attention from what??

Quite to the contrary Paul. You may be confusing Orly with Philip Berg. The one lawsuit of her's that I read she was arguing he was not an NBC because of his father's citizenship. That is why Leo Donofrio, who similarly argues that Obama's birth place is irrelevant because of his father's citizenship, is now saying she got ahead of herself by putting this birth certificate out there before she did further research into it. Paul, I've repeatedly cited to you authority, including Supreme Court decisions, which support my interpretation. Jonathan Turley has acknowledged the argument I make as well, although he thinks the Supreme Court is unlikely to rule that way simply because it wouldn't dare remove him from office after he was already sworn in.

I'm also surprised nobody noticed that Orly was in Tel Aviv, Israel when she gave interviews about this latest legal move on her part, suggesting another possible party's involvement in this matter.

Still talking about this crap, AI?

Gotten anywhere with your crusade of late?

When it comes to protecting and defending the U.S. Constitution, I will never shrink from my responsibility, Dana. I'm sorry that you don't share that commitment with me.

She's an anger-addled nutcase who won't answer questions. Something ugly has got that woman, and she's not fighting it at all.

"protecting and defending the U.S. Constitution." Only if you agree with a strained and unique interpretation of "natural born citizen", which you acknowledge has never been squarely addressed by the Supreme Court. If you agree with the natural meaning of the words, and acknowledge that women have not been mere chattels in at least 100 years, then the great majority of those who believe born in the USA means Natural Born Citizen are those who are protecting and defending the Constitution, and those who claim otherwise are besmirching it for purely political reasons. After all, this was never an issue prior to Obama releasing his Certification of Live Birth in June of 2008 showing definitively that he was born in Hawaii and putting to rest in the minds of reasonable people the claims that he was born elsewhere. The question was not raised in regards to James Buchanan, who's father was Irish, nor Chesterr Arthur, who's father was Canadian. However you may want to rationalize that these presidents' fathers were indeed American (of which there is absolutely no definative proof), their status as citizens was at least in question at the time of their future president-sons' births, yet this was never made an issue in either of their elections.

One who pushes for a new interpretation of the law is normally advocating for his or her client, not "defending and protecting" an interpretation which has yet to be made.

Paul, I've gone round and round with you on this same thing previously. Buchanan's and Arthur's fathers were naturalized citizens. In the case of Arthur, whose father was Irish, there were claims that he had been born in Canada where his father once resided. That proved to be a diversion from the real issue, which was whether Arthur's father was a U.S. citizen at the time of Arthur's birth in Vermont. Presidential scholars learned that Arthur lied about his date of birth. The reason he probably lied about it to make himself look older than what he really was so that it appeared his father had lived long enough in the U.S. at the time of his birth to have become a naturalized citizen. If his father was a citizen at the time of his birth, even as a naturalized citizen, that would have made Chester a natural born citizen. As it was later learned, Chester's father had indeed become a naturalized citizen but had not done so at the earliest date possible, which meant Chester should have been disqualified. Note that he succeeded to the office from VP after Garfield was assassinated. Arthur was never elected to the presidency in his own right.

You are correct. Arthur was elected Vice-President, and his father was Irish, or Scots-Irish, to be exact. There is absolutely no evidence to suggest that his father (or Buchanan's) were ever naturalized - that is pure conjecture. The point is that these presidents' fathers' nationalities were, at the very least, in question, yet there is no record of this ever being an issue prior to either son becoming president. The nationality of Chester's father was never "the real issue" in the 1880s, nor is the question of our current Presidents' father's nationality a real, legitimate issue now.

Correction. William Arthur, Chester's father, was naturalized in 1843 - 14 years after Arthur's birth. http://www.scribd.com/doc/11067180/William-Arthur-father-of-President-Chester-Arthur-Naturalization-certificate-1843-Congress. This fact was never an issue in either Arthur's selection as VP or upon his ascension to the presidency. As you note, the locale of Chester's birth, however, was an issue. This indicates the general understanding then, as throughout our history, of natural born citizenship deriving from being born in the US, not devolving from parents.

Arthur understood the problem, Paul. That's why he lied about his age to make it appear his father had resided long enough in the US to become a naturalized citizen by the time of his birth. The Canadian birth issue was always a diversion from the real issue: was his father a citizen at the time of his birth? The answer was no, but people didn't no that. It was assumed he had acquired his citizenship many years prior to the actual date he assumed it.