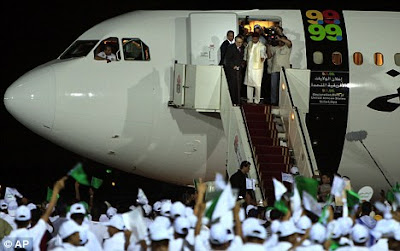 The man who helped blow up a jetliner 21 years ago over Lockerbie, Scotland, killing 270 persons, including 189 Americans, receives a hero's welcome from thousands of his fellow Muslims. When Abdelbaset Ali Mohmed Al Megrahi stepped off the jet the country's leader dispatched to bring him home to Triipoli, Libyan Prsident Gadhafi's son personally escorted him off the plane with the roaring approval of the thousands waving flags who gathered to welcome him home. President Barack Hussein Obama pleaded with Libyan officials to avoid this very scene after his pleas to Scottish officials not to release him failed. Scottish officials decided to release Megrahi from prison early because he is dying of prostate cancer. Megrahi denies he committed the crime of which he was convicted. He served only eight years of a life sentence for his crime. Meanwhile, back in America, a 17-year-old Rifqa Bary pleads with her fellow Americans to understand that she will be murdered by her own family because she committed one of the worst conceivable acts in Islam--she converted to Christianity. Bary ran away from her home in Columbus, Ohio to Florida after fearing her life would be taken by the hands of her own father.
Posted by Gary R. Welsh at 7:17 AM

At the risk of being attacked for disparaging an entire ethnic/religious group, they are a seriously f'ed up bunch of human beings.

And I'm not sure about the 'human' part.

Get ready for war with Iran.

The media is issuing their typical religious and ethnic hatred to convince us that killing women and children by the hundreds of thousands is acceptable. Our vassal state Georgia has committed an act of war against Russia (naval blockade) as an initial strategic move (Russia has stated that an attack on Iran will be considered as an attack on Russia), the NSA has just promised Netanyahu that the US will deal with Iran within the next 8 weeks, and much more that I really don't feel like typing out right now.

If you want the road map to where we're going, do a google search for "The Grand Chessboard Brzezinski pdf". Search all of those terms (without the quotes" and scroll down until you find the free scribd pdf of the book. The first half is basically a history of the Bush Administration foreign policy objectives, only it was written three years before Bush was elected. Brzezinski, the author, is now Obama's senior foreign policy advisor. He's been committed to military engagement with Russia for over 40 years.

Something else on my radar is the ship that went missing from the North Sea and was found off of Cape Verde. Various reports say that the hijacking was conducted by professional forces. Foreign media is reporting that the front of the ship was modified to hold some kind of weapon, "probably nuclear" according to the reports. Other reports are saying that the hijackers originated in several former Russian states.

If I had my sights set on attacking Iran and my popularity was dwindling fast, I might find myself wishing someone would plant a bomb somewhere. I could blame the Iranians and stir an angry throng of flag waving Americans into sending their kids into battle. Besides, Brzezinski says in the book that the American people won't support his plan unless some external catalyst spurs us into action.

I agree with him. And once again, we'll be led to the slaughter. After Obama gives his ground zero speech, millions of staunch Republicans will turn to someone next to them and say "I never thought I'd say this, but that's a great man".

If memory serves me correctly, Brzezniski taught Obama at Columbia.

Gary - You may have read that in one of my posts, since Obama has refused to release his transcripts for Columbia. To my knowledge there is no official evidence that Obama was Brzezinski's student.

What we do know is that when Obama was a poly-sci student, Brzezinski was at Columbia as the Dean of Russian Studies. We also know that the subject of Obama's masters thesis was Soviet Nuclear Disarmament.

For those of us who understand how to draw relational diagrams, there's little question that Brzezinski and Obama had a relationship at Columbia. Which begs the question: Did Obama choose Brzezinski as his advisor, or did Brzezinski choose Obama? Answer that correctly and the next logical question becomes "Then who chose Brzezinski?"

If you follow national level politics, these are the kinds of questions that open the door to understanding the motivations of our foreign policy, contrary to the reports on CNN, PBS, FOX, and even the White House Press Room.