Tell Me Why I Shouldn't Be Surprised 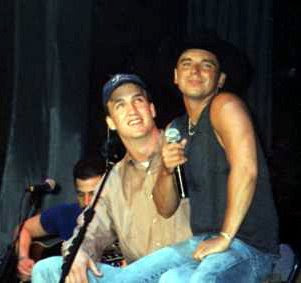 Country music star Kenny Chesney will play the first concert in the new Lucas Oil Stadium as part of his summer tour on September 13. Best pal Peyton Manning has been known to follow Chesney around on his summer concert tours. Hopefully, the Lucas Oil appearance will help Peyton kick off a better season next year than the one which just ended abruptly after the Colts lost their first playoff game against the Chargers yesterday.
Posted by Gary R. Welsh at 7:24 PM

Peyton making sheep's eyes at him?

Is this photo for real? I've heard the rummors but seriously, this is a really funny photo.

Yes, it's real. As I recall, it was posted on Peyton's website.

Thanks for asking, Tim because I was wondering the same thing. AI as always gets great stuff!

I'm surprised Peyton hasn't objected to that photo being on his or anotehr site. It certainly does raise questions.

Kenny Chesney is going to play at the Lucas Oil Pole Barn!

Please, let's not stoop to rumors.