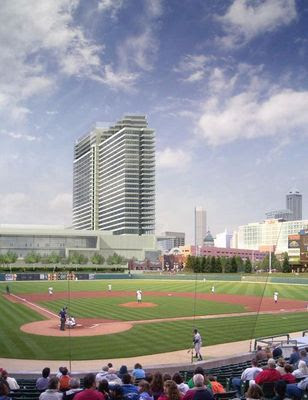 As it always is, the working men and women are asked to bend over and take another one for one of Mayor Peterson's super wealthy friends. Never mind that your property taxes will climb more than 25% this year on average and your local income tax will be doubled on top of all the other tax increases you've endured over the past 8 years so Mayor Peterson could hand out more than $1 billion in public subsidies to the state's wealthiest citizens. This man must be stopped. We must take back our city government this year. We can't afford another 4 years of Bart Peterson.
Posted by Gary R. Welsh at 3:27 PM

How can they justify asking for $66 million in incentives for a private hotel?

Are they trying to quietly slip through millions of dollars of additional taxpayer subsidies to cover the cost over runs for the Lucas Oil Stadium and Convention Center expansion?

Could Advance Indiana post a detailed itemization of this proposed $66 million in incentives for the public to see?

"Indianapolis Public Improvement Bond Bank Executive Director Barbara Lawrence says the city has already committed $48.5 million in tax increment financing (TIF) for the project but will tomorrow ask the Metropolitan Development Commission to consider up to $66 MILLION in TIF funds to help pay for costs related to the transaction. She says the City Council's Economic Development Committee will consider the measure at its meeting tomorrow night."

The Star is now reporting:

"The city is LIKELY to receive equity in the project, so it would share in the profits, said Bruce White, chairman of White Lodging."

After several months of negotiations, they haven't pinned down the project costs, financial structure or government incentives? This is hard to believe. Something is not right here.

The proposed amount of incentives for this project are outrageous.

The public's significant investment in the convention center and Lucas Oil Stadium should be enough incentive to spur additional development without huge government aid packages.

Didn't Bart Peterson criticize Steven Goldsmith for the lavish use of incentives after the governments huge investment in the Circle Center Mall using this same argument?

I would like to see the plans for the expanded convention center after the ballroom and parking were stripped out of the original drawings because of cost overruns from the Lucas Oil Stadium.

$44 to $66 million would have gone a long way to build a first class convention center instead of a hollowed out warehouse that cant financially support itself.

This is further evidence to support his concerns.

Or are the downtrodden now corporations like White Lodging (which in my experience is a very successful company that isn't going to refuse corporate handouts - but will remain very successful without them).

You can bet there won't actually be any "profits" since most of the money will be skimmed off in the form of management fees. It's like the poor suckers who sign movie deals based on a share of the profits - and there ain't ever been a movie turn a profit yet using Hollywood accounting.

Why do the voters in Indianapolis put up with this?

The game remains the same in Indianapolis for the business community. The only change is that our current Mayor, supported lavishly by all the former Republican donors and insiders, is wearing a Democrat hat.

Matt Tully's article in today's Indy Star about the Mayor as well as it's large photo op of the Mayor yesterday pushing concrete is telling of where the city's only paper stands.

The voters CAN change the leadership but they won't.
Why?

Why not add a "green" roof to the top of the meeting space on the new hotel design AND to the roof of the convention center expansion?

It would establish of habitat at roof level, assist with storm water management, reduce ambient temperatures, save heating and cooling expenses, absorb urban noises, improve air quality, and double the life of the roof by protecting the roof membrane.