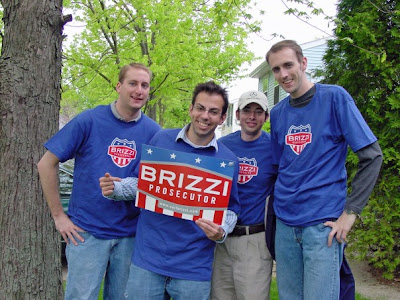 WTHR's Steve Jefferson reported this evening that Indiana Department of Health attorney Terry J. Record worked as an intern in Marion County Prosecutor Carl Brizzi's office and was later hired on as a full-time deputy prosecutor, but he was fired after a week because he allegedly lied about a prior traffic arrest according to Prosecutor Carl Brizzi's office. The 26-year-old Record is charged with operating a vehicle while intoxicated and causing the death of 47-year-old Jimmie Cash in a traffic accident last night. Based on details in this Star about this prior accident, there are haunting similarities to last night's crash. The Star reports:

Before he joined the health department, the Marion County prosecutor's office offered him a job in October as a deputy prosecutor. He had just passed the bar exam, Symons said, but the job was still conditional because he hadn't yet been sworn in as an attorney.

In the incident that led to Record's forced resignation, on Oct. 7 Indianapolis police found his car overturned on College Avenue near 22nd Street after it had struck another car. Record was not at the scene, and later he told a police officer the car may have been stolen after he left a Broad Ripple bar early that morning, taking a cab home, according to a police report.

His supervisors questioned him."There were some inconsistencies," Symons said. "Based on those answers, we decided it wasn't appropriate for him to work for us
any longer."

Brizzi's office also announced today that a special prosecutor would be appointed to handle Record's case. Record is shown on the far left above with other campaign volunteers for Carl Brizzi.
There are some troubling unanswered questions here. While the firing of Record by Brizzi's office seemed appropriate, there is an aspect of this latest revelation that raises questions about the prosecutor's and/or police's handling of Record's case. As the Star report notes, Record was never charged with hit-and-run or with filing a false police report in connection with the traffic incident from last October, although the office reportedly fired him because of concerns about conflicting statements he made. It could be that police didn't follow up in the investigation of the case and bring it to the prosecutor's office to prosecute.
Also, because Record was later sworn in as an attorney, it appears the incident may not have been reported to the attorney disciplinary commission as it should have been. If it had been reported, you can bet the incident would have been taken very seriously and, perhaps, Record would not have been admitted to practice law until the investigation was completed because of the serious nature of the charges. The same year I was admitted to practice law, a classmate was denied admission because of prior DUI convictions. He was not admitted until two years later after the Commission was convinced he was no longer drinking. According to the state's roll of attorneys, Record was admitted to practice law on October 20, 2006, and is currently in good standing. It is an extremely tragic series of events. Record may have needed professional help to deal with an alcoholism problem. The possible failure by anyone to intervene may have contributed to this tragic outcome. The commission prefers and expects that attorneys will self-report their problems, but this often doesn't happen.
One final note, did anyone at the Department of Health contact Brizzi's office to ascertain why he was fired? It seems this is an appropriate question the media should be asking as well.
Posted by Gary R. Welsh at 5:07 PM

I agree. It seems there were several events occurring simultaneously that Mr. Record passed through the cracks.

What I wonder is would it have done any good, after all precedent is set the disciplinary board allowed Aaron Haith to keep his law license after some OVWI's/DUI's/DWI's whatever.

I believe Haith's privilege to practice law was suspended for a period of time, although he was eventually reinstated.