ATV Accidents The Talk Of The Valley 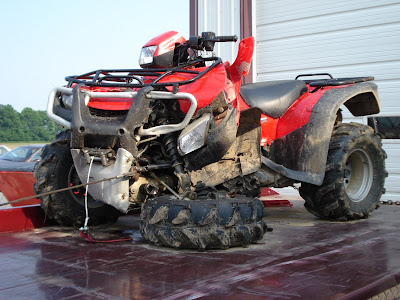 Before I attended my nephew's funeral this morning, I read the Terre Haute Tribune-Star, the morning fare at my parents home in Marshall, Illinois. "ATV Accidents On The Rise" blared the headline for a front-page story, which included a mention of my nephew's fatal accident Friday night, along with several other recent accidents. Deb McKee writes:

In the past week in the Wabash Valley, one man died and two were hospitalized with serious head injuries after unrelated accidents involving all-terrain vehicles.The deaths are indicative of a dramatic rise in the number of ATV accidents, which authorities say corresponds to an increase in sales of the vehicles.

Gary R. Cornwell, 59, of Georgetown, Ill., was seriously injured Saturday from head injuries after an accident at Mule Ridge ATV park on Indiana 63, near Hillsdale. Witnesses said he tried to climb a steep hill when the ATV tipped over backwards.

Brett A. Eitel, 22, of Marshall, Ill. died from injuries he suffered in an ATV crash Saturday on Livingston Road, near Marshall, Ill.

Wayne Smith, 49, of Jasonville was seriously injured May 22 when he lost control of his ATV while driving in Jasonville on a county road. The ATV rolled over him, according to a news release from Indiana Conservation Officer Max Winchell. Smith was carrying a passenger, 29-year-old Shad Robling, who was thrown off and suffered injuries to his hands, arms and face. Smith was taken to Wishard Hospital in Indianapolis by Air Evac helicopter, and later released.

Less than three weeks ago, a town marshal was killed in an ATV accident in Cayuga.Louis Beam, 68, of Cayuga, died in the evening hours of May 14 in Indianapolis’ Methodist Hospital after being airlifted with injuries suffered in a May 12 ATV accident. Beam and his wife Janice had been riding their ATV in a charity event when they rear-ended another ATV on Vermillion County Road 150 in Clinton.

In Spencer County in southern Indiana, a 7-year-old boy died Sunday when the ATV he was riding flipped over on his father’s property.

The growing popularity of ATVs is attributed to the skyrocketing number of accidents according to McKee's story. “There were more than 136,000 emergency-room visits [in 2005] in the U.S. because of ATV accidents. And there were 748 deaths,” Indiana Conservation Officer Max Winchell said. "That number dwarfs figures reported 10 years earlier," Winchell said. "He says the reason is that more and more people are becoming fans of the recreational vehicles." A safety expert thinks the ATVs provide the drivers with a false sense of security:

All-terrain vehicles, weighing anywhere from 300 to 700 pounds, according to Delong, often provide the rider with a false sense of security.“They have four wheels, compared to an off-road motorcycle, but people tend not to realize [ATVs] have a real short wheel base,” he added.In addition, the vehicles are “rider active,” Delong said, meaning “wherever your body is on that machine dictates how that machine is going to handle.” The most important safety concerns for riding an ATV include wearing the right equipment (including a helmet with a mouth guard and goggles, and a chest protector); riding single; avoiding alcohol and prescription drugs while operating the vehicle; and knowing your limits, Delong said.

When I was growing up, 3-wheelers were the craze. I bought my Honda ATC-90 when I was 13. I flipped it over the first week I had it. Fortunately, I wasn't seriously injured. There is something to the false sense of security argument. Because it had three wheels, you felt like it was safer than a motorcycle. In reality, the 3-wheelers were very difficult to steer and very unstable on anything less than a flat surface. After a nationwide effort to outlaw 3-wheelers, manufacturers stopped making them and replaced them with the 4-wheelers that are now so popular. Something I learned this weekend, which surprised me, is that many ATVs are operated without brakes. After extended use, particularly in the water, the brakes are quickly worn out. An ATV like the one my nephew operated can easily reach speeds of 50 MPH or more.

I'm sure there will be efforts to ban the 4-wheelers just like there was with the 3-wheelers, but there will always be something else to take their place. Most ATV enthusiasts are thrill-seekers and naturally like living life dangerously. Skateboarding looks pretty dangerous to me, and it doesn't even require a motor.

The photo above is the ATV my nephew was riding last Friday night when he struck a tree and was fatally injured from internal injuries he suffered. Unfortunately, a lifeline helicopter was not available the night of my nephew's accident. Bad weather prevented him from being airlifted to Methodist Hospital from Terre Haute's Union Hospital where he died a few hours after he was transported there. And thanks again to all of you for your expressions of support. The outpouring of support for my sister's family in the community has been overwhelming. More than 1,200 attended the visitation services last night and there was SRO in the church today for the funeral. He was laid to rest next to his grandfather, who was buried just weeks ago.
Posted by Gary R. Welsh at 4:24 PM

I'm sorry for your loss - what a tragic story.

I cannot begin to imagine the pain you and your family are feeling. Peace be with you and yours.

All-terrain vehicles are extremely popular out here in the Western part of the state, not just with kids but with adults, too. There's a whole lifestyle culture around them -- all new to me.

The Terre Haute paper did a good service by researching the number of accidents. Environmentalists also hate them, because they tear up the ground.

But in a state that won't even legislate the wearing of helmets for motorcycle riders, will anything be done to monitor the safety of ATVs? The brake issue is very troubling. And, I must say, I rarely see anyone on one with any headgear or protection....

They are also very popular with farmers. My dad and brother use them as a utility vehicle for surveying the crops and carrying out daily activities on the farm. They are very inviting for aggressive riding if you've ever been on one. The allure to ride them hard is difficult to avoid for most enthusiasts.

This is almost too sad to read. My heart aches for you, AI.

But it invites the question: who would buy one, for recreational use, without properly training and protecting the rider?

I don't get it. I grew up on a farm. We used an old pickup to get around, and it was held together with chicken wire and chewing gum. None of my cousins still farming, have one of these ATVs, and they're extremely gadget-happy.

Farming as an occupation is one of the most-dangerous as it is. Why dial in a dangerous ATV?

A friend of mine who sells them in estern Ohio, calls his showroom "God's Waiting Room," half-jokingly. Except it's not a joke. People get hurt and killed on them.

No amount of legislation will change people's habits. Unfortunately. More education, from families such as yours, might help.

Godspeed. I know this is a tough week for you.

1200 people at the visitation? Wow that's some crowd! How many times did they run out of toliet paper?

My 97 year old grandmother died last week and only 30 people came, she outlived almost everyone and there was plenty of toilet paper to go around and then some.

A co-worker of mine got an ATV a while back. He is from Terre Haute and said there is even a long trail you can ride along the river (I am guessing Wabash?). One of my sisters old boyfriends was also big into ATVs here in the Indy area (as are others). I went with my co-worker to a rural area with his ATV. I don't think it was my first time on one, but it was the first time in many, many years. I did not like riding the ATV. I am sure over-time, it would have been more comfortable. I personally do not like being 'exposed' like I am on an ATV. There is nothing to hold you in. There is no roll bar/cage to protect you if you roll. I would much rather like a mini-dune buggy than an ATV. I also don't care for convertable vehicles either, for similar reasons. I know a lot of younger folks like to do "tricks" on these vehicles. Hopefully the lose of your family member will be a wake-up call to others in the area that they should use caution when riding these things.

A few years ago, there was an accident (no here in Indiana) where there were five or seven kids one ONE ATV. They were driving on a road and something happened and they hit a semi-truck. There were lots of dead kids, including a brother and sister, the only children of one couple. These things are really dangerous if not used by adults and used the wrong way.

Farming as an occupation is one of the most-dangerous as it is. Why dial in a dangerous ATV?

When I drove my friends ATV, I could see a purpose for them. People who hunt and camp would like how they can carry supplies. The problem is that too many folks think they are _toys_ instead of _tools_. They don't follow the directions at all. Also, there is no reason for them to go so fast. My co-worker wanted me to go all out, on a hilly area in this valley. It scared the hell out of me. I think these things should be more like lawn mowers. Maybe they should be limited in how much power they can have?