The Advantage Of Being Indianapolis Mayor 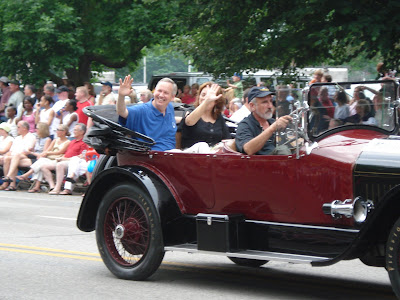 If you aren't the Governor of Indiana or the Mayor of Indianapolis, it is next to impossible as a politician to win a spot in the Indianapolis 500 Festival Parade. Mayor Goldsmith and Mayor Hudnut used to walk the parade route and shake hands with folks along the parade route. Mayor Bart Peterson opted for the safety of the backseat of one of the Hulman family's classic antique cars. Click to enlarge photo.
Posted by Gary R. Welsh at 9:35 PM

Uh, you're right, Gary, but you omitted one important fact:

Goldsmith used to walk up to folks with his stiff style, and they'd recoil. Visibly. The man had the public personality of a porcupine.

Hudnut, well...folks flocked to him. Including, it seems, some moms the security wished wouldn't.
Refer to the above paragraph as the chief reason Hudnut left Indy, with his pecadillos intact, lest they be revealed by his successor.

And, to be fair, Mrs. Peterson can't walk that far because of an injury she sustained at the Aids Fund-raiser last April. She's doing much better, but a long parade walk would probably not be good for her. And they did get out of the car multiple times...I saw them.

The complaints on this site are intoxicating. Remember, it was just about a year ago when the Mayor's wife was seriously injured. Because she wanted to participate in the parade, they drove instead of driving.

Really, this site is about the same old hashing of blame the mayor, etc.

I think I'll be moving on to something more productive.

Parading about the big city sure ain't what it used to be 50 years ago...

Here wuz the People's Mayor -- a.k.a. Parade Grand Marshall Peyton Manning -- had ta have 4 turtleneck-clad bodyguards at the corners of his Corvette, protectin' his inno-sense.

And strangest of all wuz His Esteemed Excellency My Biker-boy Mitch and Guvernator, just a ridin' his Harley as the Statehouse Leader of Pack without ANY visible security. (Naw, them twenty Hells Angels a ridin' with Guv don't count, unless they wuz a-packin' heaters. Did anybuddy check?)