Jim Bopp To The Rescue 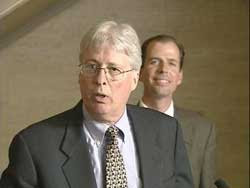 Fort Wayne Observed reports that embattled Fort Wayne GOP candidate Matt Kelty has hired the religious right's go-to attorney, Jim Bopp, to defend him against charges he illegally failed to report six-figure loans from three individuals on his campaign finance disclosure statement prior to this May's primary, a race he narrowly won over the party's favorite, Nelson Peters. Most of the money in question came from Fred Rost, who heads Allen County Right to Life. Interestingly, Bopp has represented numerous Right to Life groups around the nation in challenging campaign finance laws and regulations he and the anti-abortion groups believe impede upon our free speech rights. One can't help but wonder if there is a Right to Life link between the Kelty campaign and Bopp's legal representation in this particular matter.

An attorney hired by Matt Kelty said in a noon news conference that the Republican nominee for Fort Wayne mayor is in complete compliance with campaign finance laws. James Bopp is considered an expert in campaign finance law. He is based in Terre Haute, but is also well-known on the national level.

Bopp contends that Kelty has actually done more than is required by law and has done nothing wrong.

Last week, questions were raised concerning the origin of $158,000 in Kelty campaign funds. Initially, those contributions were listed as coming from him. But Kelty submitted new paperwork to the Allen County Election Board reflecting the funds in question were actually loans from members of his campaign staff. The election board has asked Kelty for further details before it can hold a public hearing on the matter to determine if anything illegal was done.

Allen County Democratic Chairman Kevin Knuth attended the news conference and NewsChannel 15 spoke to him afterwards. Knuth says despite what Bopp claims, there's still a question of ethics even if no laws were broken and that will be an issue with voters.

Let me get this straight. He didn't report $160,000 in loans he received from three individuals to finance his uphill battle against party favorite Nelson Peters, which constituted more than three-quarters of the money he raised during the primary. Instead, he said he loaned the money to his campaign from his own personal funds. A few party leaders catch wind of the actual source of the loans, tell him he broke the law and ask him to come clean. Kelty fesses up and amends his campaign report to reflect the true sources of the loans. And we're supposed to believe he didn't break the law because Jim Bopp says he didn't break the law? Don't forget that Bopp's testimony before the Indiana Senate concerning the effect of SJR-7 was contradicted by a prominent Reagan-appointed judge, J. Harvie Wilkinson, III. It seems to me that Right to Life has a lot of exposure here in this mess and Bopp is in full damage control mode.

Give Bopp all the room, and rope, he needs to hang himself. He may finally have bitten off more than he can chew.

Indiana Election Law gives some leeway to county election boards on these types of report violations. That board is controlled by Republicans. The Republican establishment is not favorably disposed to their nominee. Kinda like the Evansville kerfuffle.

And lest any of my fellow Dems gloat: not so fast. There was a time we behaved like a circular firing squad, too. These things are cyclical.

However, that being said, the Ft. Wayne and Evansville Republican mayoral nominees are a complete hoot. A total meltdown. If their downfall could also diminish counsel Bopp's "stature" in the legal community, it's a Trifecta for the Average Hoosier.

Praise God. (Before Bopp tries to usurp THAT mantle) (Again)

I agree that none of us Dems should gloat on this - and I don't think many are (other than it is good that Kelty's true colors are beginning to show in public.) This is simply more evidence for people who are already cynical about politics that all politicians are corrupt. We're not, but when someone like Kelty, who has convinced a lot of people that he is truly a golden boy, shows himself to be dishonest, it reflects badly on everyone..

There are several people who believe the right to life group is pushing to get Kelty into the mayors office so that he can then turn around and run for congress.
That said, I have a feeling the local rtl group is funneling money through Fred Rost and then to Kelty.

A-1:49, Very Good Observation. There may be more contributions in the name of another than are seen on the surface. Individuals who don't want to be known and perhaps certain corporations, bound by the $2000 limit to local candidates, gave RTL or Rost the money who in turn "loaned" it to Smelty..er, Kelty. The Allen County election board better flip over some more rocks.

Jeff Pruitt has some good commentary at www.fortwayneindiana.blogspot.com.

Is Kelty the Stepford-wife looking goof in the background of this picture?

I mean...I hate to go strictly on physical presentation, and I know it's terribly shallow of me...but that's a shit-eating grin if I ever saw one. And a pretty stupid one at that.

As posted elsewhere, on other blogs...give Bopp rope. He may finally hang himself on this nutjob. This could be fun.

It is Kelty in the background. The photo is priceless fodder for the Democrats.

Yeah, I'd love to see the RightWingnuts lose in Eville and the Fort. How is the South Bend race shaping up for GLBT? What about West Lafayette? Are there other races in central Indiana where we might be able to push SO into HROs like Indy?

Keep up the good work Gary!

To anonymous about RTL being placed in the Mayor's office and then run for Congress.

We already have a RTL by the name of Souder. I think RTL are more than happy with him.