Hastert Will Agree To Plead Guilty To Illegal Hush-Money Payments 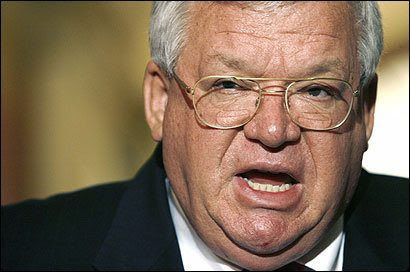 The man who once held the third highest office in America as Speaker of the House has agreed to plead guilty to federal charges he made $1.7 million in illegal hush-payments to a former wrestling student with whom he allegedly carried on an inappropriate relationship decades ago when he was a high school wrestling coach in Yorkville, Illinois according to the Chicago Tribune. Dennis Hastert, who allegedly agreed to pay the man $3.5 million as part of the scheme to obtain his silence in the matter, will change his not guilty plea to guilty at a hearing a federal judge has scheduled a change of plea hearing for October 28 where his formal written plea agreement will be offered to the court assuming his lawyers and federal prosecutors agree to the terms by then. Hastert was originally charged with one count of currency evasion and one count of lying to federal law enforcement. Some reports indicate that federal prosecutors are insisting that Hastert agree to serve at least one year in prison as part of any plea agreement, although the terms of the plea agreement under discussion have not yet been agreed upon.
Posted by Gary R. Welsh at 9:25 AM

Republican Speakers or would be ones don't have a sterling track record....maybe Indiana needs a new one?

Stop the Presses get Jimmie, Lois and Clark on this!!! Another "Leader" with a very checkered past. Call out the CDC to determine if there is some type of Airborne Disease that infects so many "Leaders" once they enter the House.

What I find sick about this is McConnell, Reid, Pelosi and Boehner are total zeros, but they are our "leaders".

Hastert was infected before he entered politics. Apparently you aren't allowed to serve in any position of significance in this country unless you have a past that makes you one hundred percent blackmail-worthy.

"Apparently you aren't allowed to serve in any position of significance in this country unless you have a past that makes you one hundred percent blackmail-worthy."

AND... it may also be the case that one isn't allowed in or to serve in any position of significance in this country [or in this City] unless some attorney political party boss sees and realizes just how willing one is to be bought, sold, and used as a pawn on the political chess board to be moved for the financial benefit of the connected crony insiders.