The Indianapolis Star's Washington bureau reporter Maureen Groppe picks up this little gem in the latest release of e-mails Hillary Clinton stored on her private e-mail server while she was Secretary of State.

"Are you still in basketball-crazed Indianoplace?" Clinton wrote in an email to an aide in 2010, one of the many missives recently released by the State Department in response to a Freedom of Information Act lawsuit.

Indiana Democratic Party spokesman Drew Anderson went for the positive interpretation, noting that 2010 was the year Indianapolis hosted the NCAA Basketball finals. "I mean, at least she knows we are die-hard hoop fans? he tweeted. 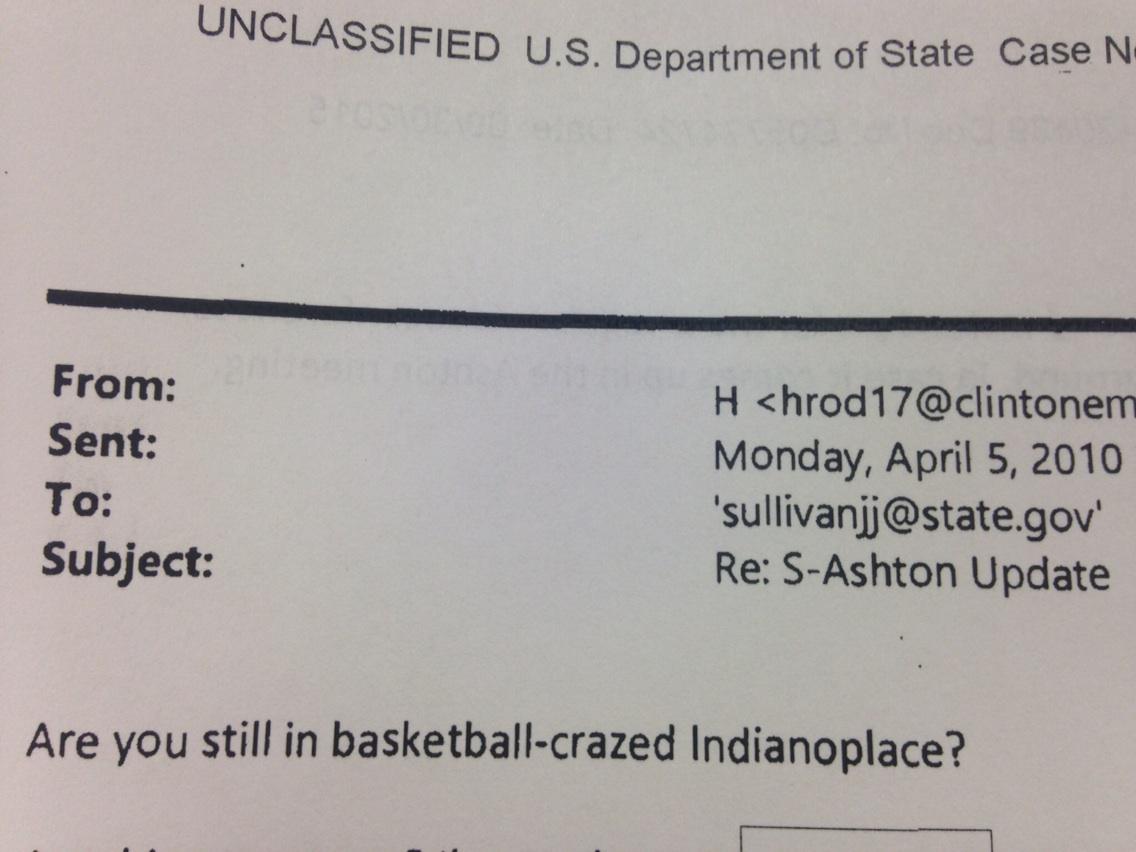 Yeah it's Indianoplace until she comes to town for that big withdrawal from the big Democratic ATM machine known as the Simon Family.

why on earth wouldn't a President iof the US choose, after their term, as so many have before them, choose to retire here and live out their post political career as a Hoosier?

Maybe Richard "Indiana is my home" Lugar can answer that question from his permanent home in Virginia.

You can count on spin, deflection, and the application of plenty of lipstick to that pig who wants to ruin the country as president and you can count on lies from the D's as given the Obama record that is about all they have left to offer.

Coming from Home-is-where-Bill-is-Hillary... Or is it more like home is where the server is?

I'm no HIllary fan, but as I passed through our mostly deserted airport last week after returning from a real city and noticed that there were 48 flights to Florida and 3 to the rest of the world, I came to the conclusion that this place really is nowhere. There's nothing to be offended by here, Indy. This is a provincial city in a dying part of the world that thinks much more highly of itself than reality on the ground suggests it should.

anon 5:03, unfortunately, Indiana still IS one of the 50 states that make up the country and she wishes to be dictator over. It is so sad how the D's dismiss it with a wave of their hand while they would have vilified a Republican. No doubt it would be ditto in reverse. God help us....we are headed down a dark path

Hailstone you may have already known this but it bears repeating - From Fox 59 - CARMEL, Ind. (June 22, 2015) The Democratic presidential candidate will attend a fundraiser at 2 p.m. at the home of Cindy Simon Skjodt, the daughter of the late Mel Simon of Simon Malls. According to our newsgathering partners at the Indianapolis Star, a minimum donation of $2,700 is required. More than 100 people are expected to attend. Former Indiana governor Evan Bayh helped organize the event, which is closed to the public and the media.

Typical Hillary event Closed to the Public and Media - "Show me the Money" -. Hillary you are going to lose to Bernie.

Anon 5:37 you forgot the carpet bagger Senator Dan Coats, he lives in Virginia, oh, excuse me, he has an empty apartment here!

Flogger - that's exactly what I was referring to. She also came back in '08 for a Simon hosted fundraiser as I recall.

Barring a Sherman statement from Joe Biden, the DNC will rig the convention to favor Biden before ever allowing Bernie Sanders the nomination.