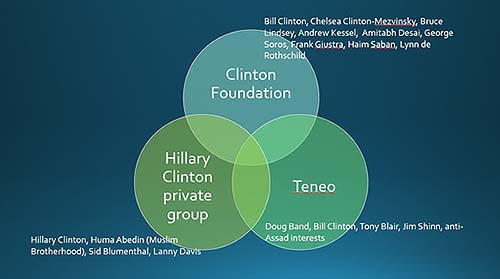 While mainstream media reporters and Washington insiders debate and deflect over whether it matters that Hillary Clinton used a private e-mail account and server to communicate highly-sensitive government matters during her tenure as Secretary of State, independent investigative journalist Wayne Madsen uses tried and proven methods for conducting legitimate investigative reporting by connecting the dots to make fools of them all in one succinct column at the Intrepid Report. Too consumed by political posturing, the noise makers prevent us from seeing the forest for the trees. Quite simply, Clinton in a very rogue fashion succeeded in establishing a shadow State Department that affected American foreign policy for personal profit in true Clinton form.
Posted by Gary R. Welsh at 9:11 AM

Privatization is the deceptive, half-pregnant illogic of statism; which preys upon freedom & loots the free market. It's not beyond the realm of healthy imagination, that Shrillary designed this scheme for hack-ccess in exchange for cash; expecting to survive deleterious results therefrom (destruction of American culture, etc.) as one in league with fellow statists or global "elites."

Yet, true to history & the b-rate movie template; establishment elites don't survive the script; predictably opening that $ marked door which hides a monster of their own creation & demise...

Madsen never found a conspiracy he didn't like - still swinging at windmills and batting zero.

Quite the opposite, anon. The mainstream media takes years to catch up with Madsen. He was reporting on the NSA's vast spying network on Americans years before anyone heard of Edward Snowden.

During the debate - When ever Wall Street Greed and Crony-Capitalism, and Steroid Capitalist Hedge Funds came up Hillary went to the escape and evasion course. Do you recall her stern admonishment to Wall Street?? - I told them to cut it out- WOW what a powerful message. Read her comment as - It is OK to screw Main Street but Do not get Caught. Do not be so open about your unbridled greed. Bernie kept coming back to the PACs, and Super PACs that the 1% fund and there fore attempt to control the elections. Hillary of course had to remain silent. It was the only time I can recall during the debate she did not try to talk over the other candidates.

Yes, Gary, you are correct about Madsen. Thanks for publishing this latest blog report. Frankly, I thought everyone knew this about Hillary Rodham Clinton and William Jefferson Clinton. These two parasites on everyday Americans are champs at perverting the governmental and legal systems to create the fabulous wealth they've accumulated over the years. That members of their own party continue to absolve and fawn over them is some weird liberal Democrat fetish I will never understand.

Wait, doesn't Israel run the US Dept of State?
And the muslim brotherhood runs the whitehouse?
How and when did wallstreet lose control?

Flogger: Not to be argumentative; it's statism that's patently crony or steroidal, not capitalism which must be reconciled to a level of transparency unprotected / unshielded by a corrupted state, benefiting from said cronyism.

There are some interesting items the McMega-Media does not want to touch about the Clintons.

Back in 2014 on her book tour Hillary told Diane Sawyer that her family was 'dead broke' when they left the White House in 2001. A CNN analysis of the family's financial records in early 2013 showed that Bill Clinton had earned $106 million from paid speeches since leaving the presidency behind. Since leaving the State Department in 2013, Hillary Clinton, too, has cashed in on being a highly sought after speaker by charging upwards of $275,000 a speech.

Speaking fees Mrs. Clinton reported in her financial disclosure forms in 2015. $12,029,500. There is list of these companies at http://moneynation.com/hillary-clinton-net-worth/ I suppose these companies chalk off these fees as a Business Expense.