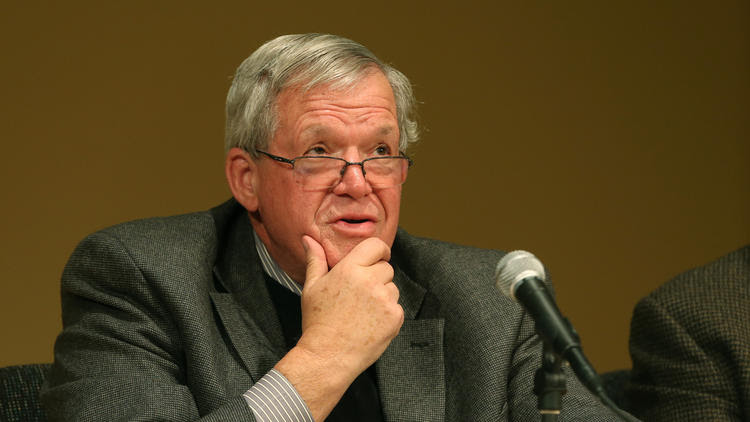 UPDATED: PAYMENTS MEANT TO CONCEAL SEXUAL ABUSE OF A BOY
It turns out the old wrestling coach from Yorktown, Illinois was as dirty of a man as I always thought him to be from my days working with him as an Illinois House Republican staffer back in the 1980s when he was a former state lawmaker. Former Speaker of the House Dennis Hastert has been indicted for making cash withdrawals of $1.7 million from an Illinois bank over a four-year period as part of an agreement with an unidentified man to pay him $3.5 million to stay quiet about misconduct committed by Hastert known to the man and then lying about the purpose of the cash withdrawals to FBI agents. The unidentified man to whom the payments were made had known Hastert most of his life. The $3.5 million payment scheme allegedly began after a 2010 meeting between the two men about bad acts that pre-dated Hastert's political career (pre-1980) according to sources familiar with the case--in this case sexual abuse of an underage boy.

Hastert served as Speaker of the House for eight years after two successive House Speakers, Newt Gingrich and Bob Livingston, were forced from their positions in quick order by political scandals. The former high school wrestling coach has been working in Washington as a lobbyist since his resignation in 2008. Hastert faces two felony charges of structuring currency payments to avoid federal currency reporting requirements and lying to FBI agents. The indictment was made by the U.S. Attorney in Chicago. Long-time Advance Indiana readers will recall an under-reported allegation made by a government whistle blower, Sibel Edmonds, who claimed she had knowledge of bribes Hastert, former Indiana Rep. Dan Burton and other members of Congress had accepted from officials in Turkey. Hastert denied the allegation, but his first client as a lobbyist was the Turkish government, which reportedly paid him $35,000 a month.

I'll never forget a bad experience I had with Hastert when he was a member of the Illinois House of Representatives. I was in a meeting of Republican members of the House Revenue Committee as the staff member for the committee when Hastert accused me of making misrepresentations about a bill he had sponsored before the committee in front of all of the members. His accusation was completely unfounded and his bill was a piece of crap he had introduced for some political crony in his district. The Republican spokesman for the committee later went to him and told him he was completely out-of-line and he owed me an apology. The classless Hastert refused to apologize to me. My boss, the House Minority Leader, would later tell me to keep an eye on Hastert because he didn't trust him. I told him I knew what he meant. Karma's a bitch, Denny! You're dirty secret is no more a secret.

A Chicago Tribune opinion offers this on Hastert's "Dark Secret":

When FBI agents confronted him about the withdrawals, Hastert said he was stashing the cash because he didn't trust the banking system, according to the feds. By that time, he'd withdrawn $1.7 million.

Why? The affidavit provides few clues. "Individual A" is a resident of Yorkville, where Hastert taught high school and coached wrestling from 1965 to 1981. The two have known each other "for most of Individual A's life."

Hastert left teaching for a seat in the Illinois General Assembly and quietly worked his way up to the U.S. House of Representatives, where he became the longest serving Republican speaker in history. He's been a lobbyist since he left office.

Many of the people who knew and liked Hastert were, frankly, surprised that he rose to such national prominence.

But not nearly as surprised, no shocked, no stunned, as they are today.

On paper, he's accused of moving money around illegally and fibbing to the feds about it. Between the lines, prosecutors suggest he has harbored a dark secret.

Pedophilia is a right and privilege for the rich and powerful. Remember how badly Hastert handled the sexual abuse of congressional pages by the perverts in Congress?

What does Bruce from Yorkville know?
UPDATE: Tribune sources confirm the payments stemmed from an improper sexual relationship Hastert had with a boy while he was still a high school wrestling coach prior to entering politics in 1980:

One of the officials, who would not speak publicly about the federal charges in Chicago, said “Individual A,” as the person is described in Thursday’s federal indictment, was a man and that the alleged misconduct was unrelated to Hastert’s tenure in Congress. The actions date to Hastert’s time as a Yorkville, Ill., high school wrestling coach and teacher, the official said.

“It goes back a long way, back to then,” the source said. “It has nothing to do with public corruption or a corruption scandal. Or to his time in office.”  Thursday’s indictment described the misconduct “against Individual A” as having “occurred years earlier.”

Asked why Hastert was making the payments, the official said it was to conceal Hastert’s past relationship with the male. “It was sex,’’ the source said. The other official confirmed that the misconduct involved sexual abuse.

Hastert and his attorneys could not be reached. Representatives of his lobbying firm declined to comment.

I guess he should have setup a charitable foundation...

Technically, that's true. Livingston was elected to take Gingrich's place. They were still in the transition before Gingrich formally stepped down and allowed Livingston to assume his role as Speaker before his sex scandal hit and led to his resignation. Hastert was the second person chosen by Republicans to lead the House following Gingrich's resignation.

At least these monsters are eating their own. This sicko was the pusher of the misnamed PATRIOT Act. Too bad he'll get a slap on the wrist like other insiders such as Patraeus rather than Chelsea Manning.