City-County Councilor Brian Mahern recently resigned from the council after he started a new full-time job working for the Marion Co. Assessor. As was reported at that time, at-large City-County Council member Zach Adamson is planning to seek appointment to fill out the remainder of Mahern's term and then seek election to his district seat next year. Adamson's at-large position was eliminated as a result of legislation Republicans passed through the Indiana General Assembly in hopes of improving Republican prospects of regaining control of the 25-member council body. Now we're hearing that former Marion Co. Democratic Chairman and lobbyist Kip Tew is planning to seek appointment to serve out the remainder of Adamson's term as an at-large council member. In addition, Tew has reportedly established a new residence in the newly-drawn District 2, a seat he will seek to represent in next year's election we're told. Redistricting placed City-County Councilor Will Gooden (R) in District 2. Tew, who is this close to Democratic mayoral candidate Joe Hogsett, would become his eyes and ears on the council.

In other council news, a number of members of the Republican City-County Council gathered at a fundraiser to kick-off the campaign of Tim Craft in his bid to oust the incumbent Republican in District 3, Christine Scales, because she holds true to her Republican convictions and has refused to go along with the bad government initiatives of the Ballard administration that will cost Indianapolis taxpayers for decades to come. Tim Craft is an associate at CB Richard Ellis Real Estate, which has received lucrative no-bid contracts from the Ballard administration, and which totally screwed Indianapolis taxpayers. The firm was responsible for selecting the much-criticized airport site for a new criminal justice center, which the administration later agreed to move to the site of the former GM Stamping plant. The firm is participating as one of three bidding groups that the Ballard administration has been engaged in negotiating a P3 agreement in clear violation of Indiana law, a move fully supported by Republican council members. Ballard's former chief of staff, Chris Cotterill, is serving as Craft's campaign treasurer. Craft just moved into District 3 so he could run for Scales' council seat in next year's primary. The former residency law required a candidate to have been a resident of a district at least two years, which was reduced to one year by the same power grab bill enacted by the state legislature that eliminated the at-large council seats. Make sure you check out the Republican council members who showed up for Craft's fundraising kick-off shown in the photo below. 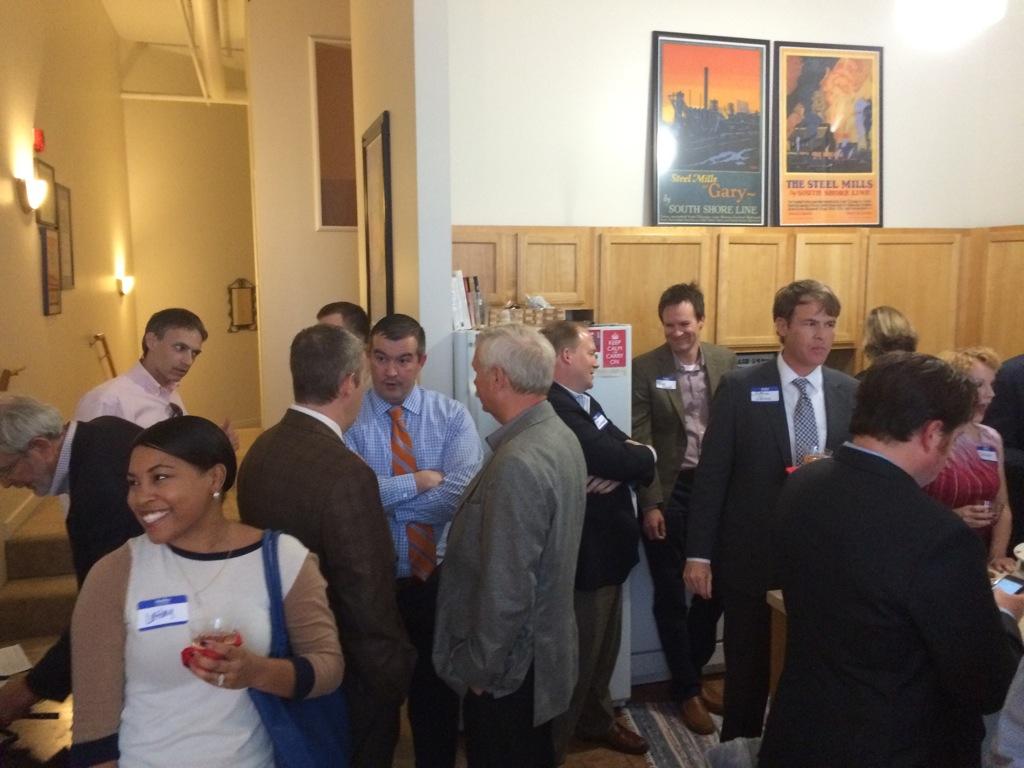 Does that happen to be Jack Sandlin in the middle of that gaggle?

You left out Mike McQuillen.

All of them, both parties, hypocrites clinging to power and actually believing they are "important". Megalomania at its extreme.

From Adamson to Miller to McQuillen to Maggie Smith to Tew... these are the egomaniacs who back in our teen years we wouldn't elect to student council ... but through political machinations are now our "City leaders".... what a joke they all are.

That the MCRCC would push this Tim Craft against CC Councilor Christine Scales- the most ethical, honest, and caring Councilor we have- says everything about the local GOP and their douches that will dance to any tune Grand and his stooge Walker play.

LOL, Tew is not close to Hogsett although I'm sure he would love people to think that. He has few friends in the party other than the bosses. He's a hair away from not having his lobbyist job, and ran frank lloyds slating defeat (!) earliest this year and shortly thereafter his client ESS which wanted the clerks office contract back fired him/his firm. But I'm sure he's in it or all the right reasons LOL!

Forging the citizen signature on the public treasury, to pay bar tabs of self service under the guise of "public service," might just be corrupt...

I have heard negative impressions of Tim Craft but then he would fit in well with the mean boyz who are not interested in public service but interested in self-serving, back slapping, ling each other's pockets behavior. Big mistake targeting Scales. She is well liked and works hard for her constituents. Targeting her will result in a D in that seat.

Can we please have candidates who are sincerely interested in public service and not self-serving interests?

I'd be curious as to who else is in the picture besides those mentioned above.