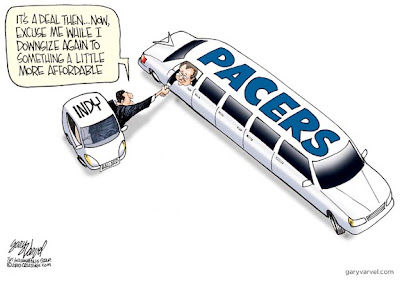 [Editorial cartoon by the Star's talented Gary Varvel]
I've blogged extensively about the role free tickets to sporting events have in influencing our elected officials' views towards spending billions on sports palaces and giving away hundreds of millions of dollars in additional subsidies to the billionaires who own the sports teams. Our own Mayor Greg Ballard just this week agreed to a $33.5 million give-away to billionaire Herb Simon and his Indiana Pacers. Ballard has accepted free tickets to Pacers and Colts game since he took office in 2008, as well as free country club memberships, but he refuses to itemize and value those tickets and free memberships on his statement of economic of interest he is required to file annually with the City. Los Angeles Mayor Antonio Villaraigosa has recently come under investigation after it was revealed that he failed to report nearly $50,000 worth of tickets he has accepted to sporting and other events. Los Angeles' ethic commission is holding public hearings on the matter and heard recommendations from Bob Stern, President of the Center for Governmental Studies, on rules the city should adopt concerning free tickets. His recommendations included the following:

1.City rules should be amended to require city officials to disclose all gifts received for ticketed events (such as Lakers' or Dodger' games), even if the officials are performing an official function at these events. Both state and local law now exempt these events from disclosure.


2.City law should require disclosure of gifts when city officials bring spouses, friends or an entourage to an event (although the official should not have to disclose a security person who accompanies the official.) Current FPPC regulations only address relatives and do not deal with friends or colleagues of the official. Gifts to these people should be disclosed.

Los Angeles actually has a stronger ethics law than Indianapolis already thanks largely to a statewide law. State law requires all state and local officials to report any gift of $50 or more from a single source. It also prohibits state and public officials from receiving any gift or gifts of $420 or more from a single source. In addition, an L.A. ordinance prohibits city officials from receiving gifts of $100 or more from anyone who might be trying to lobby them. Indianapolis officials, including the mayor, are required to report gifts of $100 or more they receive from persons doing business with the City. Mayor Ballard obviously doesn't believe either the Colts or the Pacers are doing business with the City despite their huge public subsidies because he doesn't report all of those free tickets he gets from the two teams on his statement of economic interest.

Those of us who supported Ballard in 2007 had no idea he could be so easily bought off with free tickets to sporting events, but it turns out the guy can't get enough of the freebies. He rarely bought tickets to sporting events in Indianapolis before he was elected mayor because he didn't earn enough money to attend them.  He has taken a one hundred eighty degree turn in his views toward further subsidies to the sports teams after he started getting his free tickets. The same thing happens to people who could never afford to buy Pacers or Colts tickets on their own until they get elected to the City-County Council and suddenly find free tickets being handed to them all the time. Those tickets are usually accompanied with free passes to suites stocked with plenty of free food and drinks. Frankly, I think they should be barred from accepting any free tickets to avoid falling under the spell of the billionaire sports team owners. If these officials had to pay like the rest of us to attend these events, they might not be so anxious to give away so much of our money to the Pacers or Colts.

UPDATE: A story in today's Star about state lobbying expenditures by Mary Beth Schneider highlights just how much state lawmakers receive each year in freebies. She writes:

The vast majority [of the $26 million reported] was spent on salaries for the 629 men and women registered to lobby the legislature. When their pay, plus the fees lobbyists paid to register, are subtracted, that means more than $886,000 was spent on other lobbying -- including trinkets such as mugs and calendars handed out, receptions and tickets.


Only a small fraction of that is itemized on the reports. Lobbyists report by name only those legislators for whom the spending exceeded $100 -- and only if the event was one to which not every member of the General Assembly was invited . . .


Duncan, who is retiring this year after 16 years in the House, was surprised to find herself topping that list.

"What? What?" an astonished Duncan said.

Her tally was boosted by a trip to Las Vegas, which she took along with three other lawmakers, including Simpson, courtesy of the Indiana Motor Truck Association, to attend its annual convention. Her airfare, hotel and meals tallied $1,886.38. The balance of her total includes sports tickets from Vectren, a dinner from Hill-Rom and meals from the law/lobbying firm of Baker & Daniels for herself and her husband.

Schneider's report notes that a new state law has reduced the reporting requirement on gifts from $100 to $50, which should capture a lot more of the freebies given to state lawmakers, including tickets to sporting events and concerts. Schneider also breaks down the amount of freebies by caucus, which showed the following:

When the itemized reports are tallied by caucus, they show that House Democrats, who hold a 52-48 majority, accepted more than $2,000 in meals and tickets. House Republicans accepted about $11,500.

It looks like House Democrats made a deliberate effort to cut down on the acceptance of freebies, while the House Republicans did not. "With this being a crucial election year, major ethics reforms on the table and pressure from some groups, including the gambling industry, [House Speaker Pat] Bauer said he told his caucus to "be conscious" of what they took from lobbyists," Schneider writes. "I didn't (realize) they listened that well," he said.
Posted by Gary R. Welsh at 10:54 PM

It's amazing what you can get for under $100 to avoid having to report it. You can easily get some of the best seats at a concert or play (or two if you want to site a few dozen isles back), or eat at the best restaurants.

No way those club memberships are under $100 though. The Columbia Club charges an annual fee in the thousands plus a monthly hundred or two on top of that, right?

I am not surprised by Mayor Ballard's venality, but only wonder whether his successor will be as venal as he is. What a deplorable state of affairs has this sinfulness brought to Indianapolis!

Matt, I think it is fair to assume that Ballard has accepted about $40,000 to $50,000 in freebies since becoming mayor if you properly value every free ticket, free membership and gifts he has received since becoming mayor. He's totally on the take. His staff laughs about it.

The Mayor controls who gets into the City's suites in LOS and at Victory Field. I'm not sure if the City has a suite in Conseco Fieldhouse. The ICVA had a suite at the 500 at least two years ago - I just didn't happen to hear if that is still the case.

I do not know if the City has to kick in more fees for these suites or not.

So, long way around the barn, but, perhaps the Mayor 'gives himself' tickets to some of these games.

The free suites for the City and the ICVA are part of the lease agreement. Nonetheless, Pat, there should be a value placed on them because they are still a gift to these officials thanks to the taxpayers' generosity. It's bullshit if the billionaire sports team owners can give free tickets and suites to the CIB and ICVA and then they can turn around and give them to officials and claim they are exempt from the reporting requirement. Ballard promised transparency and we've gotten anything but that. These politicians should be issued 1099s each year just like the rest of us when we receive things of value instead of money. Hell, I had to pay tax on a bicycle I received from an IT company several years ago as a sales credit. Ballard got two new bikes given to him last year. I'm betting he didn't report those on his tax returns. I don't know what the hell the problem with the media is in this town. They should be digging into this and reporting on it. Then again, didn't we learn the Simons take a bunch of the media folks down to resorts in places like Cancun for a week-long free vacation every year?

Man Gary, you don't forget anything! I forgot about those Cancun trips.

Good point. There we were- waving signs in front of three TV stations and the Star- screaming about media bias, overspending, and health "reform"- when all we had to do to get equitable media coverage was buy them all trips to Cancun.

What were we thinking?

Thank goodness our Constitutional protection of the press isn't going to waste....

Can someone explain why fans riot when a team wins?

I always want to loot when my team loses, but everyone else wants to do it when the team wins, and it is causing personal conflict.

ANd today, Norm Cox dares to question the contractual arrangement for these $10 million payments should the NBA go into a lockout. The lockout, mind you, was the urgent catalyst to getting this deal nailed down right now for 3 years 'just in case.'

Now Norm discovers we might be on the hook to pay the Pacers EVEN IF THEY AREN"T EVEN PLAYING due to the lockout.

What do people do if they are flunking out of contract law - Go to work for the City of Indianapolis?

I saw that. Isn't it funny that Ballard brought up the collective bargaining agreement during the press conference announcing the three-year deal and said a short-term deal was better because we could evaluate the situation post-labor agreement? The agreement does not provide an escape clause for the CIB, and I think that was intentional. Ann Lathrop knew the answer to Norm's question and simply lied. She's become very good at that lately.

Of course the whole reason for this bogus renegotiation arising could be as a 'favor,' to shield the Pacers from their obligation in the (likely) event of the season being aborted.