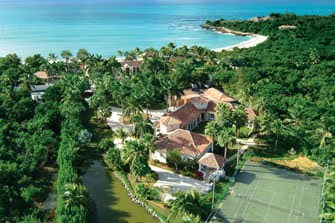 Former Conseco CEO Steve Hilbert's palatial Carribean estate in St. Martin is for sale. An observant reader found this listing on Christie's Great Estates. "Le Château des Palmiers—The Home of the Palms—is an exquisite residence that blends the elegance of a private château with the amenities of a five-star resort," the listing reads. Tomisue Hilbert's website promotes rentals of the estate and describes it as a "9-bedroom château [which] includes a 5-bedroom oceanside villa and a 4-bedroom gardenside villa, and provides an intimate, relaxed and attentive environment within the walls of a gated enclave." "Situated on the white sand beach at Plum Bay, it features many amenities including a huge heated pool, fitness center, tennis court, and covered outdoor bar, billiards and dining areas."

Tomisue's website boasts that celebrities and powerful business people have been guests at the home. "Guests have included many of the NBA’s greatest stars and some of the world’s most powerful people, including Donald Trump, Meliania Knauss and of course, many Hollywood celebrities, including Anna Nicole Smith." Yeah, I want to buy a multi-million dollar estate just because Anna Nicole Smith or Donald Trump once slept there. I believe the home stayed out of the reach of creditors because it was put in Tomisue's name.

CNO Financial Group, Inc. (formerly Conseco) plans to auction Hilbert's palatial Carmel estate this month after efforts to sell the estate through a traditional realtor listing have failed to produce a buyer after five years. The original asking price on that home was $20 million, which was later reduced to $9 million. It was once valued at more than $30 million. CNO obtained the home through a court action in Hamilton County to seize assets belonging to Hilbert to help pay some of the debt he owed to the company.
Posted by Gary R. Welsh at 5:34 PM

Hilbert and some co-workers from those days are doing well. Make that, more than "well". Many lawful and honest stockholders and investors didn't come out of the Conseco bankruptcy nearly so well.

What "financial reform" legislation, from either party, will ever address that?