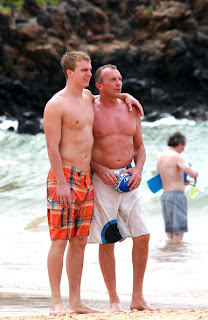 A slew of Notre Dame athletes, including second-string quarterback Nate Montana, the son of quarterback great Joe Montana, were arrested for under-age drinking at a party in South Bend last night. Eight football players, two men's basketball players and nine hockey players were among 42 arrest for minor consumption at the off-campus party according to the South Bend Tribune. Here's what the newspaper is reporting on last night's arrests:

An athletic department spokesperson said that men's basketball coach Mike Brey and hockey coach Jeff Jackson are aware of the arrests and that both coaches would handle the matter internally.