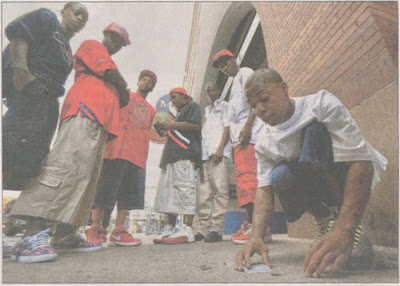 Did anyone else happen to catch this photo that ran in the Star yesterday alongside a story entitled, "The evolution of Black Expo is a matter of pride?" As an observant reader points out, the young boy with the cards, Boosie, appears to be playing three card monte with the other boys looking on during Black Expo's Summer Celebration downtown. The caption read that Boosie was showing a card trick to his friends. Three card monte, as defined by Wikipedia, "is a confidence game in which the victim, or mark, is tricked into betting a sum of money, on the assumption that they can find the money card among three face-down playing cards." It's another form of shell game that has been around for centuries to con people out of their money sort of like what our CIB does to us all the time. At first the dealer uses a shill to make it look easy to win by following the shufflling cards in order to lure innocent onlookers into the game, who then lose their money betting on the game. I guess it could loosely be described as a card trick as the Star's caption read, but it's actually an illegal form of gambling. I wonder if the Star's editors realized they might be promoting an illegal form of gambling by running this photo.

UPDATE: IMPD police have released a photo of man named "Shamus Patton" who they are seeking as "a person of interest" in connection with Saturday night's shootings during Black Expo's Summer Celebration downtown. It gets more interesting. A reader has passed along a post someone made on an IU-related web forum by a BFisher which reads, "The kid shot outside of Nordstrom's was involved in a spontaneous gambling session right on the sidewalk." The post continues, "A customer came in; told my daughter 'there's a gambling table set up on the sidewalk, you had better call security because there will be trouble.' Ten seconds later.... POP!"
Posted by Gary R. Welsh at 11:59 AM

Now this is interesting...

The shooter was identified as Shamus Patton.

Shamus Patton has a Facebook profile that lists 'Smurphy Southside-Bandit' Robinson' as a 'friend'.

'Smurphy' also has a myspace page.

The myspace page lists 'Lil Boosie' as an 'influence' for his record-producer career.

I don't know, maybe 'Boosie' is just a popular name in the 'hood.

Or maybe that card hustler can help track back to the shooter.

It's not the same person. Lil Boosie, also known as Torrance Hatch, is a Baton Rouge rap artist who recently pleaded not guilty to first degree murder charges.

That photo and profile show why a great majority of people polled today, state that they do not want concerts like the Youth Bling, connected with Black Expo's Summer Festival, back downtown.

If Shamus was running a game, that could explain why everyone was shot in the lower extremities - he was down low when he started firing. I wonder if someone didn't pay up?