Want To Buy A Yacht? 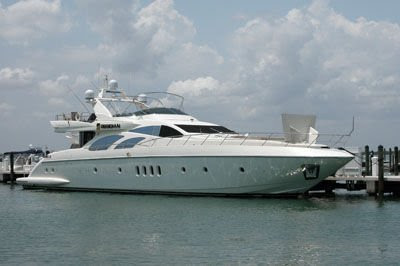 Guess whose yacht shows up for sale half way around the world in Turkey? According to Moran Yacht & Ship, the Obsidian, a luxury yacht owned by accused Ponzi scheme operator Timothy Durham, is being offered for sale in Bodrum, Turkey for $3,400,000 in Euros. That converts to about $4.78 million in U.S. dollars. According to a CNBC insider story on Durham a few years ago, the yacht sells for between $6-$7 million. CNBC said Durham spent about $5,000 a month to dock his yacht in Miami and stayed on the boat about four times a year. As an IBJ online story notes, it's not clear whether Durham still owns the yacht or recently sold it to someone else who is offering it for sale.
Posted by Gary R. Welsh at 10:29 AM

It's looking like Mr. Durham and friends are smarter than the average SEC agent and/or prosecutor of any stripe.

I'm sure glad they made him promise not to sell of his assets. That's so much kinder than merely seizing them. And we all know Tim Durham is a man of his word.

I guess this means those big Super-Bowl parties at Tim's yacht are off this year? What on earth will Carl Brizzi do for fun? Watch the game on a big-screen TV at Harry & Izzys?

Today I joined several hundred Iowans protesting at a Wells Fargo office against the big bank bailouts. It is fun. When the police come, we start chanting "The police deserve a raise".

I wish Fair Finance investors would protest at Morrison's office. Groups of them could be there 12 hours a day, and it would likely have an impact.