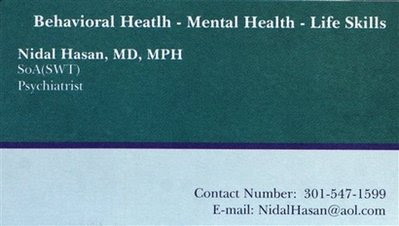 Four days after the first Muslim terrorist act on American soil since 9/11, President Barack Hussein Obama and the news media continue to pretend it didn't happen as the evidence of a terrorist attack continues to pile up. Dr. Hasan passed out copies of the Quran and his business card to friends and neighbors right before he executed 13 American soldiers and shot up another 30 of them at Ft. Hood. Being a committed jihadi, his business card used the initials SoA, meaning "Soldiers of Allah", followed by the initials SWT, meaning "Glory To Him, The Exalted" (hat tip to Atlas Shrugs). President Obama and the U.S. Army are still too concerned about the feelings of Muslims to focus attention on the safety and well-being of our troops. President Obama had to be shamed into lowering the flag to half mast at the White House before he headed off for a weekend of golf at Camp David, while his predecessor, President George W. Bush, took time to visit the wounded at Ft. Hood without reporters. Unbelievably, Army Chief of Staff George Casey, Jr. yesterday expressed concern for the well-being of Muslim soldiers. Colleagues knew of the danger Hasan posed but were afraid to speak out for fear of political correctness retribution by their Army superiors. And then there's the outrageous news that U.S. officials knew of Hasan's efforts to contact al Qaeda months ago. This is just so upsetting. We've lost our ability to defend ourselves. Can you imagine if German-American soldiers had refused to fight during World War II? They chose to put their country first. Why should our expectations be any different for a soldier who happens to be Muslim?

Actually, the most telling commentary is his AOL address.

The man was living in the past!

As Wilson would likely say, "pathetic!".

Our armed services are saying they are under 'diversity' compliance to tolerate different viewpoints and backgrounds. Let's not forget we now have a 'diversity czar' from Obama. Strange that some young people who serve cannot drink due to underage, yet expected to fight and risk death to defend the country, while others are under a 'don't ask; don't tell' policy for their behavior, yet we turn the other cheek when viewing the warning signs under the name of 'diversity'. Something about this picture...?

WHEN WILL PEOPLE LEARN?
ELECTIONS HAVE CONSEQUENCES!!!

Roger said it all.

USA is not 'officially' at war with Islam, with Muslims, and absolutely should not be. Btw, is there yet an arrest warrant out for Bin Laden due to the attacks on the Twin Towers. In fact, some security analysts refer to alQuada as the CIA's Arab legions. Thank you.