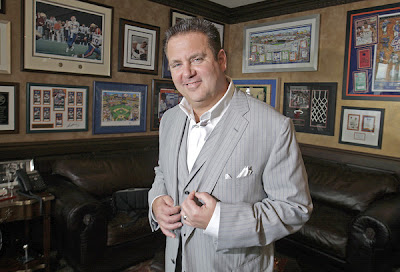 A high-flying South Florida attorney is facing the scrutiny of federal agents and his own law partners. Fort Lauderdale's Scott Rothstein owned a $5 million yacht and $36.5 million in real estate. He drove nice luxury car brands, including Mercedes Benz, Rolls Royce, Ferrari, Porsche and Lamborghini. He donated millions of dollars to GOP political candidates both nationally and at the state level. Florida Gov. Charlie Crist appointed Rothstein to a judicial selection committee in Broward County. A button in his office summed up his attitude towards the practice of law: "A good lawyer knows the law. A great lawyer knows the judge." As the Sun-Sentinel describes him:

Seldom has a South Florida figure flown so high, so visibly, so fast – and plummeted so dramatically.

Attorney Scott Rothstein's meteoric rise into the stratosphere of local politics, sports and philanthropy is suspected to have been propelled by millions of dollars handed to him by investors blinded by the glitter of a too-good-to-be-true deal.

Geysers of cash flowed from the flamboyant lawyer, who purchased a veneer of legitimacy through millions of donations to local charities. A hospital is building a lobby dedicated to his family; a Chabad synagogue already bears his name. Millions more went to expensive acquisitions suitable for a Middle East potentate.

The smooth-talking lawyer sat at the center of an empire that included fancy restaurants, million-dollar homes, flashy cars (two $1.6 million Bugattis among them), sports sponsorships, businesses and a nonprofit foundation.

Now Rothstein has achieved a new notoriety: a cadre of federal agents is poring through his accounts, contemplating charges, while investors seethe over their losses.

Investors now fear that Rothstein has been running a giant Ponzi scheme ala Bernie Madoff. According to a complaint filed against Rothstein, a review of his law firm's records showed various funds controlled by Rothstein could not be accounted for. Some investors are alleging that Rothstein may have been fabricating nonexistent structured legal settlements for sale to investors. Rothstein had several honorary designations as an attorney, including Florida's Top Lawyers and Best Lawyers in America.

Rothstein should be a reminder to the public that just because an attorney may have been designated a "Super Lawyer" or a "Best Lawyer", it may mean little about the persons ethics or true professional capability. Some attorneys in Indiana boast of being designated a Super Lawyer. Many attorneys, including me, laugh at some of the individuals who make the list when it gets distributed with the Indiana Lawyer. We refuse to participate in the charade of a survey process that is used to arrive at the designation of an individual attorney. Clearly, the designation has more to do with being employed by the right big law firm or being a member of a connected medium or small-sized firm. State attorney disciplinary commissions should bar the use of these self-serving designations in attorney advertising. New Jersey barred their use and then reversed itself. Anyone who has studied how the results are obtained knows that it is nothing more than an advertising scam for the legal publications that sponsor the Super Lawyer designation in each respective state, devoid of true objectivity in the selection process. It is misleading to the public to make it appear someone is better as an attorney than others because they've played the game to get the Super Lawyer or Best Lawyer designation.
Posted by Gary R. Welsh at 3:48 PM

Gary, I couldn't agree more about those "Super Lawyer" designations. They are such a joke. In fact, I've never seen any rankings of attorneys that had any merit whatsoever. If people want to find a good attorney, they would be far better advised to talk to their friends and family and find out who they used and were happy with, rather than fall back on some silly ratings of attorneys.

I remember when Hillary Clinton was touted as one of the 100 top lawyers in the country. Then I read a book by which talked about her involvement in the Whitewater deal. Everyone, laywers and non-lawyers. were telling her to get out, but she insisted on staying in. In fact, the book repeatedly talked about occasions when Hillary exercised very poor judgment on legal and financial issues. I finished the book with a much lower opinion of her legal abilities.

You think he knows Tim Durham?

One look at the guy and all I can think is super fraud. It amazes me how these guys get by with what they do before they're finally caught.

While I applaud AI for even covering this story, given this guy is a GOP bagman, I didn't see the call for Governor Christie or Senator McCain to return their contributions. Also, do we only expect political leaders to return ill-gotten gains? Con men buy trust by doling out their largesse to the philanthropic community. If charities knew the money might have to go back, maybe THEY would investigate their donors more in-depth. A major hospital has a lot more staff than a congressional campaign ever will. If they can't root out phony money, how can an elected official?

Uh, Crist has already acted on the contributions, Chris. You can't stop by without trying to take a cheap shot, even when I'm criticizing a Republican, can you?

You think asking for equal treatment is a cheap shot? Kudos to Christ (hadnt seen that), but what has McCain done? What about the state and local candidates this guy helped? If you agree with me that all of them should give their money back, say it. If you had done so as emphatically as you did with Congressman Carson, I'd have had nothing to say except....good job for covering this.

As you know, McCain's presidential campaign is over. Unlike Obama, he did not raise money illegally from foreigners and completely skirt the campaign contribution limits through a variety of fraudulent fundraising schemes. Do you expect him to go out and solicit funds for a defunct campaign committee to return the contributions?

Talk about greedy, Machiavellian, Rothstein gets a prize. To call him, and Hillary Clinton, super-lawyers casts aspersions on the professions.