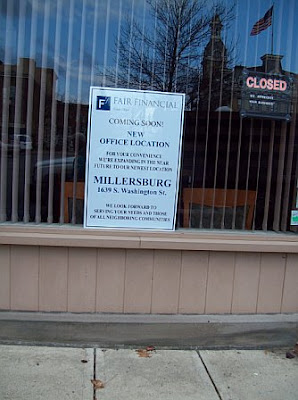 The IBJ's Greg Andrews reveals that Marion Co. Prosecutor Carl Brizzi had agreed to serve on the Board of Directors of Tim Durham's Fair Finance Company but abandoned the position after Andrews begin asking questions Fair Finance. Andrews reports:

Marion County Prosecutor Carl Brizzi said he agreed this fall to serve on the board of Tim Durham’s Fair Finance Co., but changed his mind several weeks later after Durham told him IBJ was working on an investigative story about the company.

“The whole point of being on the board was to get an education on how this stuff works,” Brizzi said Tuesday morning, several hours before FBI agents conducted a surprise raid on Fair’s Akron headquarters and the headquarters of Obsidian Enterprises, Durham’s Indianapolis-based leveraged-buyout firm.

“It seems from the article you wrote that it is more complicated than I have time for right now. So I decided against it.”

Brizzi said that Durham told him, “This stuff is going on. You probably don’t need to be in the middle of all this.” . . .

Brizzi said had agreed to serve on the board because he was interested in learning more about finance from Durham, whom he described as “a buddy.” Durham also has been a major campaign contributor to Brizzi, who is in his second term as prosecutor. Campaign finance records show that Durham and his companies have donated more than $200,000 to Brizzi campaigns.

Brizzi acknowledged he wouldn’t have been ideal for that role.

“If you are relying on your friends to educate you along the way, you probably are not as independent as you should be,” Brizzi said.

A source tells Advance Indiana that Brizzi's name actually appeared on Fair Finance documents listing him as a board member before he withdrew from the board. The Star's John Russell confirms company documents filed with Ohio regulators in October list Brizzi as a board member. "Brizzi was elected earlier this year as a director of Fair Financial, based in Akron, Ohio, according to a list of board members described in the company's recent filing with the Ohio Department of Commerce to sell $250 million in certificates of deposit," Russell reports. Russell's report seems to contradict Brizzi's comments to the IBJ's Andrews. Brizzi did not return calls to the Star responding to questions about his role on the board. Many concerned people have raised questions about the business relationship Brizzi has with Durham. In order to clear the air, Brizzi should fully disclose the entirety of his business relationships now.

Durham and his companies are now facing the scrutiny of the FBI, which raided his offices in Indianapolis and Akron, Ohio yesterday. Questions have been raised about Durham's use of Fair Finance to bankroll his other business activities. At stake is at least $200 million investors have made in the company. A debt of $168 million owed by Durham-related companies to Fair Finance that has matured now appears in debt. Ohio regulators have held up approving a new security offering of Fair Finance until the company answers questioned posed by regulators.
The photo above depicts a "Closed" sign on the door of Fair Finance's Wooster, Ohio office. A notice in the window said a new office location will be announced. Customers are referred to an office in Millersburg, Ohio.
Posted by Gary R. Welsh at 12:14 PM