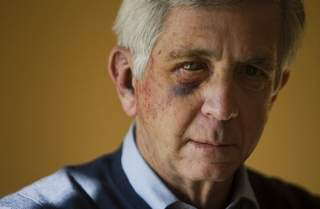 State Rep. Ed DeLaney just can't seem to stop himself from doing just one more interview with local reporters about the attack on him by a fellow attorney, Augustus "Gus" Mendenhall, who says he simply wanted to scare him because of what he did to destroy his father 26 years ago in a case involving real estate his father owned. I've had many conversations with my fellow attorneys following last weekend's attack and almost everyone is in agreement that the circumstances under which DeLaney agreed to meet Mendenhall showed poor judgment on his part, particularly for someone who has been practicing law for so many years and went through spy school training while serving in the Navy during the 1960s. Mendenhall told reporters on Monday following his arrest on Saturday for the attack that he asked to meet with DeLaney to discuss a real estate investment on behalf of Russian investors who were seeking to launder money for the Russian mafia. DeLaney doesn't admit the Russian mafia connection to the alleged deal, but he clearly admits in an interview with the Star's Mary Beth Schneider that he thought he was meeting someone he had never met before to discuss a Russian investment in real estate:

On Saturday, DeLaney picked up Mendenhall from a church parking lot and drove a short distance to look at the property, on Catherine Drive near 131st Street in Carmel.

There, DeLaney said, Mendenhall reached into a large zippered bag, ostensibly to get a retainer check DeLaney already had declined. He pulled out a gun, wrapped in a plastic bag.

"I thought that I was in a lot of trouble, and I didn't know why," DeLaney said. "He asked me if I was right with God, and I said, 'That's between me and him or her.' "

As DeLaney talked, he said, "the whole time" he fully expected to die . . .

The gun was aimed at his head, and then his attacker appeared to pull the trigger.

DeLaney saw later that it had jammed, but at that moment, all he knew was that his attacker was having trouble grappling with the gun through the plastic bag.

"I said goodbye or whatever to my Lord. I whispered goodbye to my wife. I was afraid I was dead. I said, 'OK, you're dead. If you've got any chance of coming back . . . you'd better go for the gun.' So I went for the gun."

That, DeLaney said, started "a series of encounters -- grapplings, hittings, sluggings, pushings, shovings -- at the end of which I'd be under control again because the gun would be pointed at me."

Then, DeLaney's second piece of luck struck. A friend who lives nearby, Kathy Palmer, was driving by with her husband, John, and stopped to talk.

DeLaney, still in the driver's seat of his car with his assailant keeping the gun out of the couple's view, tried to let his friend know something was wrong.

"I gave her the bird" and prayed: "I hope to God they figure it out."

She did, calling police as she drove away.

So DeLaney agrees to meet a guy on a Saturday that he has never met before in a parking lot in another county to discuss a potential real estate deal. The guy comes prepared to offer a retainer fee to DeLaney. When DeLaney arrives at the parking lot, he finds a guy wearing a strange red wig, gloves and coat and carrying a large bag. He permits the obviously disguised guy (hey, it was Halloween Day) to get into his car and drives him to a remote area to look at the real estate that a nearby resident claims was owned by Browning Investments. DeLaney decides he doesn't want to accept a retainer fee from him, and the guy reaches into his bag and pulls out a gun. What can I say? At least he wasn't meeting the guy for elicit sex in a remote wooded area?

Obviously, Ed DeLaney is the victim here and not Gus Mendenhall. Some victims, however, are not equally sympathetic ones. The facts surrounding the seizure of Mendenhall's father's property 26 years ago was government overreaching at its worst. It is unclear to me the extent of DeLaney's role in that old case, if any. It was, after all, primarily the actions of former Marion Co. Prosecutor Steve Goldsmith that led to the long drawn out court battle that left his father broken. Yet, most attorneys agree with me that it's just rather strange to agree to meet someone as DeLaney did under these circumstances. That's why some of his fellow attorneys think DeLaney would be better off to save his talking for Mendenhall's trial. What do you think?

For what it's worth, I think DeLaney is one of the sharpest members of our Marion County legislative delegation, even though he is a Democrat. Did anyone else notice that each TV reporter who interviewed DeLaney this week claimed "an exclusive interview?" How many interviews must someone give to different reporters before none of them can claim an exclusive? Anyone want to guess how long it is before NBC's "Law and Order" runs an episode based on the facts of this case?
Posted by Gary R. Welsh at 2:49 PM

First thing I thought of when I heard this story is why did Delaney hook up with that guy.

I think it is weird that Delaney is all gung ho about talking about it with everybody. And look how he posed for that picture you have there. Really weird. Mental weird. Like he LOVES the publicity.

Mendenhall is obviously a nut case. I have a good deal of respect for the Delaney family.

I don't know what happened or why he was there. That said, I'm willing to give Delaney the benefit of the doubt in this case until proven otherwise. The whole money laundering thing sounds like Mendenhall trying to smear him.

That said, Ed should stop talking.

While Ed was the victim of a crime, there is a lot of shade in the circumstances that led up to this!

Who lets someone they never met, wearing an obvious disguise, get into their car with them? Does that sound like behavior of a wealthy attorney? -Something is not right about this.

Whoever would have thought that such an encounter between Mendenhall and DeLaney would occur? And in a car in a parking lot, with disguises and all? Ed is lucky he wasn't killed.

When Delaney was campaigning to be my State Representative, I sent a couple emails with questions to him. He never got back to me.

I also left telephone messages at his office. He never got back to me even though I'm in his district.

Yet, this Mendenhall guy can get Delaney (AFTER the election) to pick him up in his car do look at a property concerning Russian investors?

How is it Russian investors can have our lawmakers' attention, yet a CONSTITUENT in his district with questions can't get a returned phone call?

So he speaks Russian. Does that mean that everyone that does is bad? What's the inference here, because I speak Russian. The Army taught me...