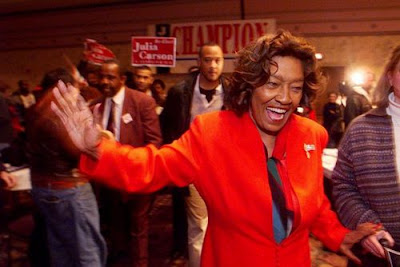 Rep. Julia Carson passed away this morning after succumbing to her long battle with lung cancer. I want to send my sincere condolences to her family. Carson was 69.
UPDATE: Mayor-elect Greg Ballard just released the following statment on Carson's passing:
Posted by Gary R. Welsh at 10:26 AM

We can join to celebrate her life on the occasion of her homegoing.

The Carson Family has my heartfelt sympathy! Julia will be missed by all. Losing a loved one this close to the holidays can make the season feel empty.
I'm sure the Carson family will celebrate the life of Julia Carson just as they will mourn the death.

Knowing that she is no longer suffering should bring a comfort to all who knew her.