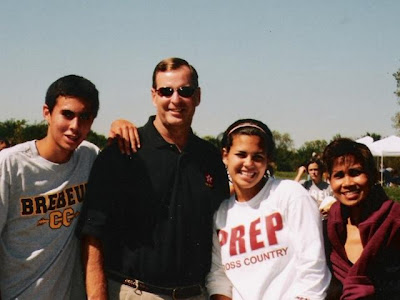 Many Republicans approached this election year in Indianapolis as a lost cause. Prominent Republicans, including former Sen. Murray Clark, City-County Councilor Phil Borst and Sen. Jim Merritt, all said "no thanks" when asked to take on Mayor Bart Peterson (D), who is seeking a third term as mayor. The conventional wisdom said Peterson was invincible and any candidate put forward by the GOP would be a mere sacrificial lamb. As luck would have it, the GOP wound up with a candidate who, although still unknown by many Indy residents, is just what the doctor ordered. His name is Greg Ballard, and he's never run for public office.

Ballard is an Indianapolis native, who graduated from Cathedral High School in 1972. Ballard says his parents were poor until his father, Duard, managed to score a decent job with Eli Lilly. Ballard attended Indiana University in Bloomington where he earned a bachelor's degree in economics. Rather than head into the private sector, Ballard did what few of his fellow college graduates were doing in the post-Vietnam era--he joined the Marine Corps. That journey would last for 23 years. Ballard rose to the rank of Lt. Colonel, and he participated in two major military conflicts, the Gulf War and the Panama invasion to remove the brutal military dictator, Gen. Manuel Noriega. He also met his wife, Winnie, along the way and had two children, a son and daughter who both are students at IU. Ballard is shown in the photo above with his wife and two children.
Ballard returned to Indianapolis in 2001 after he retired from the military. Ballard joined the Bayer Corporation as North American Operations Manager in Indianapolis where he worked the next several years. Ballard notes that he discovered a way to save more than a $1 million in the company's transportation budget of $8 million during his first three weeks on the job. Ballard also operated his own trucking company for a few years before he wrote a book entitled, "The Ballard Rules: Small Unit Leadership." He now works as a self-employed leadership and management consultant, conducting seminars and modular training. He has also taught economics classes at Indiana Business College.
Being the management consultant and former military leader he is, Ballard has adopted 5 principles he calls the "Ballard Rules", which instruct Indianapolis voters on how he would govern the city if elected mayor. Rule Number 1: Public Safety is Job One. He believes Mayor Peterson's weak leadership has led to a breakdown in the connections or links within the city that are necessary to combat the city's crime problem. He believes the mayor fundamentally failed the city by giving up operation control of the police department to the county sheriff. He intends to regain control of the police department and establish a leadership structure accountable for its actions. He also intends to re-establish the Front Porch Alliance abolished by the Peterson administration.
Rule Number 2 is to make local government decisions based on the long-term interests of the city. He believes the city has been too short-sighted in making financial decisions to get by in the short run without consideration of the long-term consequences. The city's pension-funding crisis exemplifies this short-sightedness Ballard notes.
Ballard is deeply concerned about the state of education in our city. Rule Number 3 emphasizes an educational level of achievement for our children which reflects the priority of its citizens. Ballard criticizes Peterson's focus on charter schools at the expense of IPS and the township schools. He supports a public-nonprofit partnership to support those schools, not seek to replace them.
Rule Number 4 is to make Indianapolis a place businesses want to call home. Ballard is very concerned about the flight of businesses into the suburban communities surrounding Indianapolis and the negative impact it will have on the city's tax base. He believes reducing the city's crime rate and increasing educational standards are critical for consistent economic development to occur.
And finally, Ballard believes building strong neighborhoods is a key to having good schools and reducing crime. "A great city is a collection of great neighborhoods," he says. "If the city administration is disconnected from its neighborhoods, as this one is, then the quality of life declines in those neighborhoods."
Ballard hears the concerns of Indianapolis homeowners about rising property tax bills. He thinks the tax is inherently unfair, and he favors its eventual elimination. He is also opposed to Mayor Peterson's plan to hike the county option income tax by 65% to fund pensions, public safety and criminal justice funding. He instead called on the Mayor to utilize the COIT as a way of relieving Indianapolis homeowners' property tax burden as intended by the legislature. He thinks the Mayor hasn't looked hard enough to find other non-public safety budget reductions before asking taxpayers to pay more.
Success in politics is often measured by being in the right place at the right time. I think there will be more than a few prominent GOP politicians scratching their heads in a few months, kicking themselves for not having the foresight to figure out that time was up for Mayor Peterson. He's had a smooth ride for the most part during the past 8 years, but the perfect storm has now gathered to end the Democratic resurgence he's led in the city. As crime and taxes soar, Peterson flails and grasps for sound bites and half-baked ideas to get him through November. If you've talked to your neighbors lately, you know the public isn't buying it.
What Ballard lacks in political experience, he more than makes up for in leadership and management experience. On those two scores, Ballard would arrive in the mayor's office with more experience under his belt than Peterson had upon his arrival 8 years ago. The "non-politician" aspect of Ballard's candidacy makes him a particularly attractive choice in a year when people are so fed up with the good-ole boy network currently running city-county government. Ballard would take charge of the city free of all the business and political ties which drive Peterson's management of the city. This year, city voters have a real choice for mayor. Take a hard look at Greg Ballard. I think most city residents will agree he's the only hope we have in this election year to turn things around.
Posted by Gary R. Welsh at 5:55 PM

I have heard the "Perfect Storm" theory before. Last years Dickerson vs Carson race.

Unless the REP Power structure steps up to the plate and support Ballard with cold hard cash it will be a very tough uphill fight like last year.

If may be up to the rank and file of the REP party to step up and do it on their own to support Ballard in his race against Mayor Peterson.

Ballard, like Dickerson, is receiving a lot of grassroots support. Remember that Dickerson pulled 47% of the vote in the 7th District, which excludes some of the most Republican areas of the county. I'm picking up indications that money is starting to flow into Ballard's campaign. I haven't seen any hard numbers yet, but it's building enthusiam within his own campaign. I contend that Ballard can win without what you refer to as the "REP Power structure." Many of those folks have been in the Peterson camp for the past 8 years. A lot of them don't even live in Marion Co. anymore.

Before you vote, look at your property TAX increase, your income TAX increase and think: what is the money being SPENT on?

Remember: Bart increased the number of deputy mayors, added an executive "Asst Director of Public Safety" (although there is no longer a police dept in public safety dept), increased the salary of deputy mayors, had a hiring freeze on new police, still has a hiring freeze on service-level city employees, has not given city employees a raise they deserve (but did give his staff a raise), spend millions of TAX dollars on a new home for the Pacers & Colts & gave the Simons a little something for their headquarters....


Then ask yourself if you can afford any more of the Democrats TAXing & SPENDing.

Not a chance. Get over it.

Yeah, but Ballard was SLATED and the stupid GOP got all hung up on that.

Brizzi had to spend Millions to eek out a county wide victory.

Now if the 100,000 people who voted for Brizzi donate just $30 to Ballard that would equal the cash Peterson has.

I'm with you, Pike, used the online donation thingy. www.ballardformayor.com

Who else is in?

i'm making a $100 donation. i am a fairly prototypical urban democrat and have never voted for a republican at the local level in my life. that all changes this november. i met greg and he spoke with me for 30 minutes. he's got it right people.

Bart will win by a clear and large margin but it will be hollow.

I routinely contribute to R candidates for mayor and have since 1971 (Lugar's second term race). Ballard's organization needs to get with it and solicit past mayoral contributors asap.

So far Ballard has run a very amateurish campaign.

So, 7:22, you and your ilk are the ones responsible for electing mayors who ignored:

Jail overcrowding, Combined Sewer Overlfow, Underfunded Pensions, a Juvenile Center run as a personal fiefdom by an out-of-control judge...that's about $2 billion of unpaid problems right there, and I could go on.

Solutions to all those problems were sacrificed at the Republican Altar of No-New-Taxes.

See what happens when you ignore problems? They get expensive. And more complicated to solve. Let your leaky roof go for ten years instead of ten weeks, and see how many more problems it solves.

That does not give the Mayor and Council a pass on solving these difficult issues. His announcement eysterday, about freezing hiring, should and must start with the Parks Department. There are more hacks sitting around in pickups there, than any department in government.

I think the freeze will demonstrate one thing: govt. has been too fat for a long time on the personnel side. Or on the efficiency side. Take your pick.

The Old Republican Money is in Bart's camp. The demographics in Marion County have changed but it's the same people pulling the strings behind the curtain.
Party politics seldom get in the way of business deals.
The GOP party split when their Old Guard were ran out by the New Guard.
The Old Guard took their money and influence with them.

So let me get this straight, 7:22. You don't look for ways to contribute for the good of the order, you contribute because someone hunts you down and begs and makes you feel important?

If that's the way this deal really works, no wonder this City is in the shape it's in. I hope the "little people" have more sense than you big money boys. I know I do. Anyone else who agrees, go to www.ballardformayor.com.
Good grief.