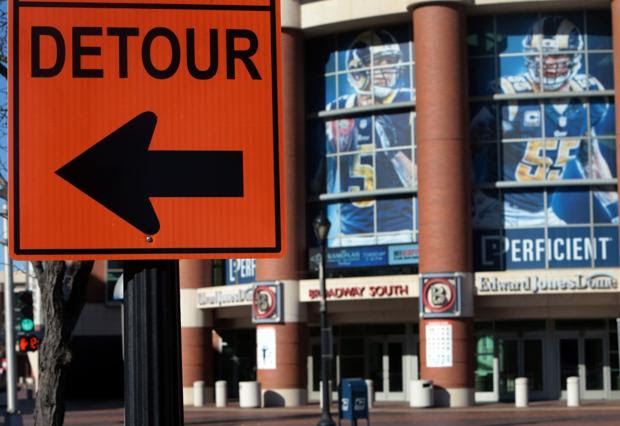 Missouri and St. Louis officials attempts to convince the St. Louis Rams to keep their NFL franchise in the Gateway City with an offer of a more than $1 billion new open air stadium wasn't good enough for the team's billionaire owner, Stan Kroenke, which he criticized as "inadequate" and a "path to financial ruin." Having written off St. Louis as a "struggling" city unable to support three professional sports teams, he made the decision with the support of his NFL team owners to pack up the team and move it back to LA where he will build a $1.9 billion stadium in Inglewood, a stadium he plans to share with the San Diego Chargers. So how many years of use will the Colts have at Lucas Oil Stadium before Jim Irsay starts making demands for something better? At least we know he can't move the team to Los Angeles now.
Posted by Gary R. Welsh at 11:35 PM

Cool, game on. Exposed, statists are competing for abuses of the public treasury- that's what's going on.

But he could move it to St. Louis!! lol

He lost a lot of leverage today.

Isn't the bright side of this that the little rich guy is going to build the stadium himself? NFL is just another business and it is a good thing they are finally coming around to paying for their own factories. Setting this sort of precedent might catch on with Indiana Lawmakers who, if they needed more revenue, could begin getting a fair rent from any number of wealthy parasites in Indianapolis...not to mention parasites waiting in the wings to sample the public paps....

Leonb - Indiana "lawmakers" are too stupid to recognize what went on. Why do you think Ersal and his Indy 11 Soccer team continuously cry for a publically funded stadium and some of our dummies in the house are more than happy to oblige. After I had written my "representative" to strongly urge her to not support the stadium as I don't want to paying for it for years to come (and eventually my children paying for it for years to come), I got the typical canned response on how she feels how many would benefit from it.

I could be easily convinced that the Ferguson riots were a factor.

Yes, I also believe the Rams move was about Ferguson; that Ferguson was the final straw. For those who are interested, Bloomberg Business is running a good online article this morning entitled "Can we fix American cities by tearing them down" which discusses the merits of demolition to remove blight, combat crime and raise existing property values. Some cities are quite happy with the results of large annual demolition of vacant properties to physically remove the remnants of unwanted housing. The green spaces are happier, no longer harbor homeless drug types at night, and also are being used for storm run off and gardens and pet parks and places for kids to play. Indianapolis can either learn the lessons of Ferguson/St Louis, and Baltimore, and Cleveland, and Detroit, or it can follow in their footsteps. Might professional sports teams abandon Indianapolis. If we have a summer like Ferguson with riots, we could lose teams, business and frightened residents. Its time to consider better options for decreasing our violent 38th St. corridor shootings, and for removing the blight endemic to certain neighborhoods inside 465.

Downtown Indy - He had been threatening to move back to LA long before the riots in Ferguson.

St. Louis has a lot more going on than Indianapolis. If STL is declining, Indianapolis is more so.

Irsay could still move to L.A. The Chargers have the first option on being the second tenant at Inglewood, and the Raiders have the second. If neither AFC team picks up that option, the option becomes available for all other AFC teams. How many are realistically interested in it?

The New Hoosierdome only has a decade left in it before Irsay can start making demands on Indy, perhaps not even that long.

Mr. Welsh, I don't think you will have to wait very long before Jim Irsay/CIB starts making noise about improvements to Lucas Oil Stadium. One of the very interesting things about the Kroenke proposal is that he doesn't want to just build a stadium, rather he wants to build an entire entertainment/living complex that will be capable of not only hosting football games, but massive events that will allow Kroenke to capitalize not just on ticket/parking/concession revenues, but also lodging/meals and other spending by visitors.

This impacts Indianapolis in two ways. First, it provides - as soon as 2020 - a direct threat to Indianapolis hosting the annual combine for evaluating talent in the draft. The big plus that Indianapolis provides, enough hotels for athletes and team personnel to be able to get everywhere they need to be in a 5-10 minute walks (and likely not having to go outside) will have a direct competitor with the benefit of nicer weather and a far more glamorous and high profile location.

Secondly, it's one more venue that will be capable of hosting Final Fours (in addition to those coming on line in Minneapolis and Atlanta in a few years) that gives the NCAA better and newer options to hold it's most visible annual event.

What struck me about the decision by the NFL owners was that it finally revealed - for anyone willing to open their eyes - that new NFL owners are less interested in getting into this exclusive club to compete to hoist a trophy made by Tiffany, but rather as a shrewd way to make millions upon millions of dollars. Jerry Jones paved the trail for a new breed of owner and Kroenke had the foresight to buy the team that had the opt out clause in its lease to reveal that Los Angeles was a waiting pot of gold for the person willing to do the digging.

Note that the Spanos family that owns the Chargers has a challenging decision ahead. They can join the Rams in LA, but only as a tenant to share in the revenues (and costs) from just the Stadium and NOT anything adjoining it. They are left to try and see if the city of San Diego will come to the table, but by all indications, the city realizes it just can't afford to do so in the traditional (bend over) manner of the past.

Well, like the poor that we will always have we will always have stupid lawmakers. We can do something about them a lot easier than winning any war on poverty, however. I am not sure that our local parasites "demand" things as we have an unaccountable Capital Improvement Board that shovels money away to a lot of ratholes. It is not hard to imagine that they initiate the giveaways.....

When I followed the stadium shake downs more, California had one pesky wrinkle called referendums. That has not stopped some cities and states from bypassing referendums that rejected Corporate Welfare.

Maybe if Kroenke put a decent product on the field in the last decade he'd have more support from St Louis area residents for that new stadium. Reality is the majority of St Louis sports fans don't care about the Rams for that reason. It has nothing to do with competition from the Cards and the blues. St. Louis is a much larger market than central Indiana. Hats off to St Louis and the state of Missouri for not giving this a$$hole everything he demanded, as Indy did for Irsay and the Simons.

We must do everything possible to keep multimillionaire welfare queens such as Jimmy Irsay happy. If we don't,how else is he going to afford purchasing a 2.2 million dollar front bass drumhead used by Ringo on the Ed Sullivan Show and a drumset used by Ringo for 1.1 million?


If we don't subsidize Jimmy Irsay,he might have a sad. We can't have that!

Kroenke's model is similar to what the Braves are doing with SunTrust Park in suburban Atlanta. By controlling all of the land around the stadium, the possibilities are endless. Why stop there...

Imagine owning revenue streams from hotels, entertainment complexes, retail, maybe even casinos. Consider this... You build your stadium on a remote Mexican beach. You put in an airstrip that can support a 737. You fly the fans in. It's all corporate bigshots now anyway. The average guy is priced out. Now you have a captive crowd, not for one afternoon but for a minimum of 2-3 days...maybe a week. They stay in your hotels. They eat in your restaurants. They shop in your stores. They rent out your prostitutes. They gamble in your casinos. That's the new model. The NFL is about to go global. It's not about fan bases. It's about maximizing revenue. Watch and learn.