According to a reliable source, Brown entered the Forty Five Degrees restaurant/bar on Mass Avenue Sunday afternoon around 3:30 p.m. Contrary to a probable cause affidavit filed by police in the case, the source tells Advance Indiana that Brown was not under the influence of alcohol when he first arrived. Brown was accompanied by another young man whom staff serving Brown understood was interviewing for a potential job with the Brownsburg Fire Department. The young man who accompanied Brown to Forty Five Degrees left close to 6:30 p.m. after the two had consumed food and several drinks. Brown was drinking vodka and cranberry juice. The source tells Advance Indiana that Brown left a short time later, indicating that he was headed down the street to the Tini martini bar at the other end of the 700 block on Mass Ave.

Brown returned to Forty Five Degrees about an hour and half later, staggering and visibly intoxicated. Brown was complaining that he had lost his hat and gloves. The staff told Brown he had his hat and gloves with him when he left earlier. Staff asked Brown to be seated at the bar and served him a glass of water while they attempted to determine whether Brown had left his hat and gloves in Tini. Staff at Tini acknowledged Brown had been in the bar but claimed they had not served him any drinks. At some point, Brown wandered out of Forty Five Degrees, got in his vehicle parked in the parking lot north of St. Clair Street, whereupon he drove through a construction fence on the south side of St. Clair, knocking over a fuel tank, before putting the vehicle in reverse and traveling back across St. Clair and into a construction area where he struck and damaged a limestone wall recently constructed and came to a stop with the rear of his vehicle resting on the tracks of an excavator on the construction site. Brown's vehicle sustained serious damage.

Marion County Sheriff John Layton's public information officer confirmed a source's claim that Brown had sent a text message to Sheriff Layton while he was at Forty Five Degrees inquiring about Mayor Hogsett's plans for his homeland security department. The source tells Advance Indiana that Brown was interested in being appointed to the job as homeland security director, a position held during the Ballard administration by Gary Coons, a former Perry Township firefighter and township trustee.

Sheriff Layton's public information officer, Katie Carlson, provided Advance Indiana with a copy of the text message Brown sent to Sheriff Layton at 5:37 p.m. Brown wrote, "Sheriff, Bill Brown here. Do you have anytime this week to meet and discuss the direction of homeland security under the new mayor and how it will go? Very much interested. To restore unified command which would include the Sheriff's department, IMPD and Fire." Sheriff Layton responded back at 9:47 p.m., by which time Brown had already been taken into police custody following his drunk driving crash. "Yes Bill," Layton wrote. "Let's get together. It's not real clear so far how HS is going to look."

There have been rumors circulating that Sheriff Layton could become Indianapolis' new public safety director and Kerry Forrestal, who currently serves as U.S. Marshal for the Southern District of Indiana, would be appointed by Democrats to fill the sheriiff's office vacancy if Layton decided to move into the new job. All of that has been speculation up to this point. Nothing has been confirmed.

Brown's text message at 5:37 p.m. would support the source's version of events, which indicated Brown was not visibly intoxicated when he left Forty Five Degrees the first time around 6:30 p.m. Brown's concise text message did not exhibit signs of someone who was heavily intoxicated. Excise police reportedly interviewed Forty Five Degrees' owner Bill Pritt, who was misquoted in the probable cause affidavit as saying Brown was "hammered" when he came into his establishment. Excise police also reviewed surveillance video footage which showed Brown was not visibly intoxicated when he left the bar the first time.

Brown resigned his position with the fire department this week after the town's fire territory board placed him on administrative leave without pay. Brown was a long-time member of the Indianapolis Fire Department before he retired and took the job in Brownsburg several years ago. Brown headed up Indiana Task Force One, which helps first responders respond to major natural disasters around the country, in the latter years he was at the Indianapolis Fire Department.

The drunk driving case against Brown may have been compromised in the course of the investigation. As Advance Indiana previously observed, the probable cause affidavit indicated that the police officer who transported the blood evidence drawn from Brown to the property control room broke the glass vial containing one of Brown's blood samples. The officer took the remaining plastic vial back to Eskenazi Hospital where Brown's blood sample had been drawn and relabeled the remaining vial, which had been damaged when blood from the glass vial spilled onto it. Brown's alcohol level was more than three times the legal limit according to IMPD.

Below is the text message exchange between Brown and Sheriff Layton. 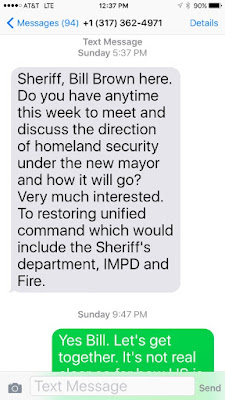 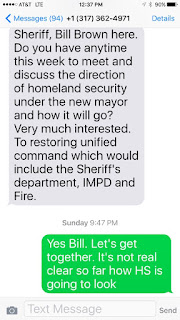 Having Excise investigate anything is like bringing in Moe Howard to be the lead investigator.

From Excise you can go on to sharia beliefs and join Congress.

Interesting how two of Hogsett's three candidates are now all over the news. John Layton assumed he had the job, that is why he brought Kerry Forrestal back (which according to MCSO e-mail is already working for MCSO, so is he working both 40 hour a week jobs?), Drunk Brown here is in the news, and then there is Louis Dezelan (who interviewed for position as well) just watching it all unfold. Brown and Layton are toxic. But the beat goes on in the Democratic Party in Marion County.

I also got a text from Chief Brown much later than the one Sheriff Layton got. It read: "trgfb fkzjhfksjf haed crasd sind hep"...followed by a sad face emoji.

Meeting with a young man, huh? I'll bet there's more to that story.