Jim Nabors Gets Hitched To Long-Time Companion At 82 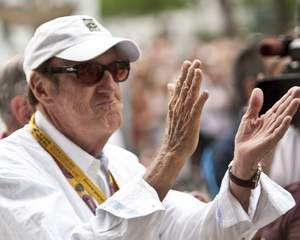 Jim Nabors, better known to older generations as the guy who played Gomer Pyle and sings "Back Home Again in Indiana" at the Indianapolis 500, got hitched to his long-time male companion in Seattle. Nabors married 64-year old Stan Cadwallader, a Honolulu firefighter. The two have been together since 1975. Although Nabors never officially came out of the closet, his sexual orientation was not much of a secret. Back in the '70s, Nabors and actor Rock Hudson were the victims of a cruel prank when a group of gay men decided to send out fake wedding invitations announcing their marriage at which Rock Hudson was supposed to become "Rock Pyle." "Mad Magazine" helped take the rumor mainstream when it parodied an item by famed gossip columnist Rona Barrett: "There isn't a grain of truth to the vicious rumor tht movie and TV star Rock Heman and singer Jim Nelly were secretly married! Rock and Jim are just good buddies! I repeat, they are not married! They are not even going steady! This is Rona Boring reporting from Hollywood!" Supposedly, Nabors and Hudson never spoke to each other again after the incident.

While we're on the subject of marriages, it's refreshing to see that 3-time Indianapolis 500 winner Dario Franchitti won't be serving as a prop for his wife Ashley Judd's planned run for the U.S. Senate in Kentucky next year against Sen. Minority Leader Mitch McConnell. The couple announced yesterday they are ending their 11-year marriage.
Posted by Gary R. Welsh at 7:43 AM