Idiot Mayor Says They Won't Come If We Don't Build It 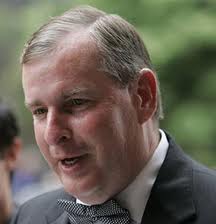 Every time I think Mayor Greg Ballard couldn't possibly say something more stupid, he opens up his mouth and spews more bile all over himself. His latest dribble came during testimony today on his multi-billion dollar mass transit plan that will begin with a nearly 20% increase in your local income tax so he can pass it out to all of the cronies who are stuffing his pockets with campaign dough and paying for his lavish overseas junkets and other freebies. “If we don’t build it they will not come,” said Mayor Ballard while making the case that it’s all about attracting corporate talent, “and if we don’t build it, the young people who grew up here, may not stay.” How full of crap can this guy possibly be? There's not a damn person who is going to decide whether to take a decent, high-paying job in this city based on whether they have a light rail or slick new bus to ride to work. That's total BS cooked up by the PR flacks who are getting paid with our taxpayer dollars to spew these baseless claims.

The proponents are still asking for their first of what will become many requests for taxing and spending authority at the same level, even though they now say they are dropping the light rail line that would extend from Noblesville to downtown Indianapolis, which the proponents conservatively estimated would cost a little more than half of the initial $1.3 billion they plan to spend. Now they tell us they're just going to offer us a better-improved bus system. Don't fall for it. It's a bait and switch. Up until now, they've been telling lawmakers that the light rail system is necessary because suburban whites won't ride the bus. Once the camel gets it's nose under the tent, all bets are off. They won't stop at just buses. The big money for the people behind this push is the massive investment of taxpayers dollars in a light rail system that will never generate the ridership necessary to even cover operating expenses, let alone service on the billions of dollars in debt that will be incurred to build it.

Who remembers the $1 billion new airport terminal the last mayor, who taxpayers voted out of office after our property and income taxes skyrocketed, told us absolutely had to be built if we wanted to become a world class city and attract the number and choices of flight destinations that every dynamic, growing city has? Since the airport moved into its shiny new billion-dollar terminal and expanded airport, the number of flights and passengers in and out of the airport has dropped every year. In fact, they're at their lowest point in ten years! And that included the year in which the city was swamped by flights coming in and out for the Super Bowl, the hosting of which we were told justified the construction of the $750 million Lucas Oil Stadium and the investment of about $50 million in taxpayer funds to put on the event. Yeah, "Build and they will not come!"


If you thought Indianapolis International Airport didn’t seem as busy in 2012 and that tickets were pricier, you’d be correct.

Passenger boardings fell by 2.2 percent last year, to 3.68 million, assistant treasurer Marsha Stone told airport board members on Friday. That’s a low not seen since 2003, according to airport records.

And it was nearly 6 percent less than what officials had projected for 2012.

It's just a matter of time before the airport authority is going to be requesting a bail out. It cannot repay its long-term indebtedness at the rate it's going unless things turn around sharply in the very near future. And don't forget that Mayor Ballard kept in place the 65% increase in the local income tax pushed by his predecessor and opposed by him during his first bid for office. You were promised 100 new police officers, among other things, when that tax was enacted. Instead, you got 200-plus fewer police officers than you had before that tax increase took effect and even more tax increases for the CIB to hand out to the billionaire sports team owners, even after tapping a federal grant to fund 50 new police officer positions. Neighborhoods which want decent police protection now must resort to hiring their own private cops. Adding insult to injury, he's back at the trough seeking a new round of tax increases for the CIB, and he now says we need to finance a new soccer stadium downtown for the benefit of his biggest political crony in order to be a "world class city." Where did the money go, Greg? In short, Mayor Ballard has zero credibility when it comes to being a friend of the taxpayers, and any legitimate Republican should think twice about supporting anything he is backing that involves more taxing and spending authority.

Any Republican lawmaker at the State House who votes for this mass transit boondoggle deserves to be ousted from the legislature. I'm getting sick and tired of Republican politicians running around talking about what fiscal conservatives they are and how closely they safeguard taxpayers' money, and then they turn around and vote for every lame-brain tax-and-spend idea that comes down the pike. They'll tell us that they're not voting for a tax increase; rather, there just voting to give the people a chance to decide as they slip free sporting event tickets in their pockets given to them by the mass transit lobbyists--paid with our taxpayer dollars--and dine with them at St. Elmo's. Any special election vote's outcome is preordained and they know it. That's why they're trying desperately to ram it through in a special election this fall where voter turnout will be abysmally low and they'll have a multi-million dollar budget to get out to vote of the government takers to put the government payers on the hook for an even larger tax bill.

Speaking of lawmakers who talk out of both sides of their mouths, check out the list of Republican lawmaker who signed American's For Tax Reform's "No Tax Pledge:

Guess who is sponsoring the mass transit bill? Rep. Gerald P. Torr (R-Carmel). The guy will actually tell you with a straight face that he's not voting for a tax increase by enacting this lousy piece of legislation he's sponsoring. Make no mistake about it. Rep. Torr is sponsoring the most massive expansion of local government taxation and spending in decades for our region. Let him know what you think, and ask him why he is breaking his "No Tax" pledge he made in his re-election campaign last year.
Posted by Gary R. Welsh at 9:30 PM

They've actually done studies on expansion of mass transit leading to new riders. They found the expansion leads to about a 2% increase. TWO PERCENT. That's the increase the Mayor is talking about when he says if you build it they will come. Yeah, 2% more will come.

When Petersen increased coit 65% ole Greg said that was outrageous and promised to roll back the tax increase if elected. What we got was the old Texas two-step, promise them anything than when you get elected claim you were misquoted.

Let's look at the Indy successes due to build it and they will come; new airport built one billion in debt and ridership at 8 year low, new convention center 250 million more in debt and smaller conventions and less participants.

Then there are the successes we have had building sports palaces; we tear down Market Square to build Conseco, kiss off another 180+ million and give all of the revenue generated by the new stadium to the Pacers and pay the building maintenance to boot and the old Market Square location is still a gravel lot and not collecting any taxes. We then tear down the Hoosier Dome to build Lucas, another brilliant plan, trash a 70+ million dollar stadium to build a 750+ million dollar stadium. We use the same convoluted logic as Conseco and give the lion's share of the revenue to the Colts.

Then on top of all of that stupidity we are creating TIFs in areas that don't need TIFs while ignoring areas that desperately need some form of incentives just to be decent areas to live.

I always felt Marion County was in need of better Mass Transit system, minus Light Rail.

My concern we might end up with 5 new buses and a huge bill as corporate consultants and sham Non-Profits skim off the top.

Given the revolving door between Government and the Private Sector you wonder where the Mayor will land after his term of office is up.

There are bus stops throughout Marion country within walking distance of most everyone. Yet, while I drive around during the day the buses are mostly empty. Without the subsidy the one popular express bus ceased due to the fact it costs more than it is worth. The airport to downtown has also stopped (I think) and Greenwood was never viable. This is the typical dreamer Democrat liberal vision without reality. I am afraid that the flawed referendum system that does not fully inform people of the true costs will get this passed. By the way removing the local homestead credit and add this will add up for the Marion county actual taxpayers. More than chump change as they usually present in their convincing us stage. By the way, I miss Carl Moldthan and his junyard pursuit of the facts but you have taken his place. Thank you.