Are Indianapolis Taxpayers Going To Be Asked To Build Another Sports Stadium? 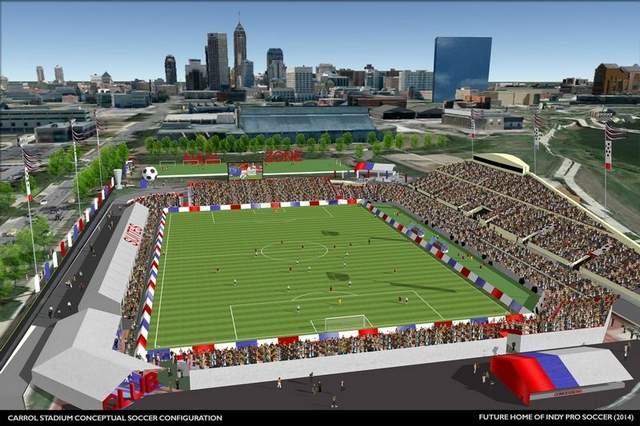 Mayor Greg Ballard's largest campaign contributor, Ersal Ozdemir, announced yesterday that an investment group he heads up has landed for Indianapolis the 12th North American Soccer League franchise, a professional sports team that is on par with what a Triple-A franchise is to Major League Baseball. Ozdemir, a Turkish immigrant, tells reporters he was "vexed by his inability to follow his beloved sport" in his adopted home so he bought a team. Ozdemir's team will start its first season in 2014 playing atop IUPUI's track and field facility until it finds a permanent home, preferably in downtown Indianapolis. A Star reporter isn't inquisitive enough to ask if taxpayers are going to be asked to build a new stadium for Ozdemir's new franchise, but the handwriting is on the wall.


Ozdemir has toured the country to evaluate soccer-specific stadiums and said the fan experience "is unbeatable." Of the ones he has toured, he said the liked the MLS stadium in Kansas City, Mo., which was built for $200 million.

An artist's rendition of the team's home at IUPUI showed temporary seating on top of the running track, which will remain.

Ozdemir reached out to local government leaders as well as the soccer community in building support for his venture.

"To be a global city, you have to have a soccer presence," said Deron Kintner, a deputy major.

We need a soccer presence to be a "global ciy?" Where have we heard that line before? Ozdemir shared more details on his planned new stadium for downtown with the IBJ:


The team would play at least its first two seasons at the IUPUI track and soccer stadium. By 2017, Ozdemir hopes to have an 8,000- to 10,000-seat soccer stadium built. His ideal location would be downtown, and he said the stadium could be part of a larger development.

Ozdemir, who is known for developing Sophia Square in Carmel and renovating the Majestic Building downtown as well as the ongoing parking garage project in Broad Ripple, said it’s too early to say what might be in the development.

It’s important that the open-air stadium be expandable up to 22,000 seats to accommodate the growth of the team's fan base, Ozdemir said.

Perhaps an inquisitive city council member should be asking a few more questions of the CIB as to exactly why it needs funding from two new tax increases while it's sitting on nearly $65 million in cash reserves since its officials told the Administration & Finance Committee this week that the new revenues would be used for operations and not its current debt service.

Over leveraged cities which is most nowadays, are more low ball than global.

Soccer finally coming to the Circle City? I can't wait!

It's possible he will ask for public assistance, but it's also possible he will privately finance the stadium. Another new NASL team, the San Antonio Scorpions will open their new 10K stadium this spring which is also expandable to 18K if growth in attendance continues to progress. That stadium was entirely privately funded.

Yeah, it will be privately funded when pigs fly.