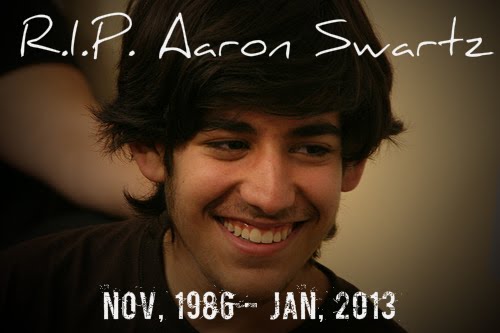 Aaron Swartz possessed everything the New World Order hates in people: brilliance, independence, principles and outspokenness. He became a hero to many when he put all of those valuable traits together to help kill the New World Order's efforts to seize total control over the Internet through the passage of SOPA during the last term of Congress as the founder of Demand Progress, a lobbying group that advocates for civil liberties and government reform. The bill, which had already passed the House overwhelmingly, was destined for passage before Swartz put his critical thinking and Internet prowess to use rallying persons across the political spectrum to defeat the legislation. The 26-year old computer genius, who created the RSS format and co-founded Reddit as a teen-ager, was found hanged in his New York apartment yesterday. Family members say he committed suicide. He was set to go on trial in April on a bogus criminal case brought against him by the Obama administration that could have sent him to prison for the rest of his life for committing the victimless crime of downloading millions of academic articles from JSTOR allegedly for the purpose of making them available to the public for free online. The academic articles were largely the product of federal research dollars the authors received from the federal government. Swartz was a Highland Park, Illinois native. In the video below, Swartz recounts his efforts at a conference in Washington this pass summer to stop the passage of SOPA.
Posted by Gary R. Welsh at 9:42 AM

Thanks AI for the introduction (albeit post mortem for many of us) to this amazing young man.