Despising Duke: How Far Will The Star Go? 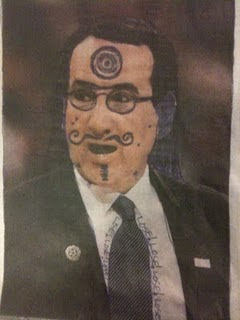 Tens of thousands of Star readers opened up the Sports section of the newspaper yesterday shocked to see the picture of Duke Coach Mike Kryzewski defaced with the headline above it reading, "Despising Duke." The Star pulled the picture and apologized for it but only after 30,000 copies of it had already reached the streets, including one read by Coach Kryzewski, who was shocked by it and called it totally juvenile. Who would have thought that the Indianapolis Star would become a local embarrassment as the city plays host to the NCAA Final Four.

They ceased being a newspaper when the Pulliam family sold out. Many days I read an article and the aritcle is attributed to *some source, our news gathering partner * reportes -reporting have reached their demise.... the paper is so 'thin' anymore it can not be even used for 'puppy training'.

Even since Gannett brought in that editor from the Left Coast, the paper has been out-of-touch with contemporary community values in Central Indiana.

The photo is something I'd expect to see in The Daily Californian (newspaper of U. C. Berkley), not a responsible newspaper in a major metropolitan area.

Gannett just doesn't get it!

The Star is burdened with the heavy load of "gathering news", supposedly providing journalism, exactly when their leadership desperately seems to want to be politically correct. When it comes to presenting all the "news" on controversial events such as illegal immigration, low city graduation rates, or the Wishard referendum, the Star's selective news gathering or reporting is apparent. They are not apt to protect average taxpayers if they will remotely have to take accusations of being uncaring or racist. As they're the only game in town, you grind your teeth and put up with it. But, when bone-headed decisions take place, such as releasing a juvenile picture of one of leading figures in an economic wave your city is riding, we're not in a position to feel sympathetic.

If the Star would like to feel the love-then do investigative reporting that makes it clear why IPS has the one of the worst graduation rates in the nation, or a true list and cost of benefits provided to illegal immigrants in this state, or present BOTH sides, thoroughly, of the Wishard referendum.

We don't need more opinion from newspapers, either overtly or subversively from their blatant choices in what NOT to report. We need them to cover both sides of issues and let us make up our own minds.

This is nothing new for the Star. The Star is absolutely disgraceful in its support for the Colts, support that extends well beyond the sports pages in its attempt to make the Colts Indiana's state religion.

The university study I read during the council 'debate' about whether to finance the building of Lucas Oil Stadium pointed out that such would be of no financial benefit to the county, in fact would be too costly, but that newspapers would be compensated, by advertising. It predicted that that was why the STAR, for one, would be fanatic for the Colts.