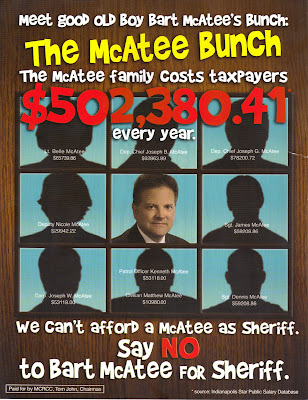 The Marion Co. Republican Central Committee has sent out a political flyer attacking the candidacy of Bart McAtee for sheriff, who is challenging the slated party candidate, Dennis Fishburn. The hard-hitting piece focuses on the number of McAtee family members on the sheriff's department payroll, $502,380.41 to be exact. That's still less than the more than $800,000 Dan Coats earned as a D.C. lobbyist last year.
UPDATE: I received a second hit piece in the mail today. This one reads, "Bart McAtee broke federal law 89 times. And now he wants to be our sheriff?" The little federal Hatch Act is the law McAtee has broken. The source cited for the violation is the Marion Co. Election Board, Findings of fact and conclusions of law, March 5, 2010. Despite that finding, the Democrats on the election board would not vote to disqualify McAtee. Gee, I wonder why? Assuming McAtee wins the Republican nomination and someone files a complaint with the federal office responsible for enforcing the Little Hatch Act, McAtee could be forced to give up his job or drop out of the election. I suppose that is a more attractive alternative for the Democrats. The problem of Little Hatch Act violations is rampant on our City-County Council. I've vowed to lodge complaints against persons who seek election in 2011 who violate the Act.
Posted by Gary R. Welsh at 2:57 PM

Hmm. So let me get this straight.

Is the MCRCC is decrying that the McAtee clan isn't sucking enough taxpayer money to be considered part of their "club"?

Or, maybe that to be part of the MCRCC team, a candidate has to have had a better track record in certain types of "legal endeavors"?

Or, maybe insinuating that the McAtees sold out to the Democratic party when Sheriff Anderson started his tenure? Well, that's true enough. Still, if this is the thesis of this piece, just come out and say, "Party Traitors!" or something more entertaining. This is too subtle (or just too dumb).

It isn't like any of the McAtees will be looking for employment elsewhere no matter who wins, is it? So, just what is this flyer supposed to be inferring?

All that money for this, and it was apparently wasted.

I agree with the GOP. Every cop's salary is a waste of taxpayer dollars.

Fire them all, and let's save the taxpayers billions.

By the way, how is a nepotism candidate, Fishburn, trying to make nepotism an issue?

If it weren't for Fishburn being the father of an injured cop, he wouldn't be in the race.

Cato isn't it fair to say if it wasn't for Joe Mac, Bart Mac wouldn't be a factor either?

Cato can you honestly deny that Layton or Brown wouldn’t be running if someone didn't help them along the way?
Please clarify your point.

Gosh golly I thought Republican's were only supposed to spend money attacking Democrats! Singing "This is the story of the dysfunctional party that had two candidates that no one could adore". OK enough of this infighting just let the best man win. The way things are going it may just be a Democrat. Maybe Shakespeare said it best "A plague on both your houses!"

You're never going to clean up that filthy cesspool.

I had another thought. Maybe the MCRCC is subtly warning that a McAtee success would be a return to 1970s policing, Indy-style (The Brady Bunch being a 70s "phenomenon").

Let's see, that would mean corruption, not only in law enforcement, but in the Prosecutor's office as well.

Considering recent revelations, that's either kind of awkward, or a double dig (one on Mr. McAtee and one on Mr. Brizzi). Maybe the MCRCC aren't as dumb as I first thought?

I don't blame Tom John for defending his slated candidate. If the MRCC didn't try to defend the slate, then slating (and the fees thereof) would be worthless.

Here on the north side, I've seen very little Fishburn activity (yard signs, door-knocking). Conversely, I've seen a lot of McAtee signs and activity, and McAtee's had radio commercials on for a while.

The slate is very difficult to beat, but it CAN be done. Usually, it's done in a district-type race. Beating the slate in a county-wide race will be very difficult but not impossible.

This is so incredibly juvenile. Is this as good as it gets for the MRCC? They're denigrating a family dedicated to public service, who are gainfully employed, for EARNING their salaries, rather than living off the public dole? How pathetic. If I didn't know Tom John was running the show, I would have thought Pee Wee Herman was.

Carlos-agreed. If slating is the process, then one can make a case for defending it and the candidate selected. Crafting such a low brow, ridiculously stupid message, however, is a mistake. Those who came up with this"message", approved it and authorized its dissemination have embarrassed themselves and the party. A fairly low level of IQ is revealed here. Reasonable people finding this piece in their mailboxes will surely question the judgement of the local GOP.

I don't think that this lousy ad will gain the slated Republican candidate for Sheriff, many, if any votes.

How date the McAtee family (and ex/non-family as it were, but I digress) actually stick around and have a career in law enforcement. Nope, I want my sheriff to be in it for the money!

And the dripping irony of a man who is only a pawn,er scratch that a candidate because of his son, or rather is sons NAME. If someone tried to use the misfortune of my son for their political gain I would be appalled. Not Dennis though, he's just the little boy who is happy to not be picked last this time.

I seriously hope Tom John is a better lawyer than he is chairman and man behind the curtain.

McAtee will win more votes then he looses from this. Tom, when you read this (And I KNOW you do)know that you most likely dealt McAtee a winning hand by this maneuver.

Where do I find the slate? I want to vote against all of it.

Cato: Here's a link to the slate:
http://marioncountygop.wordpress.com/slating-convention-2010/slated-candidates/