Another Profile In Courage 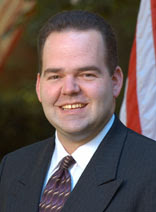 Rep. Jeb Bardon (D-Indianapolis) earns a profile in courage for authoring HB 1716 to extend Indiana's civil rights laws to include protection from discrimination on the basis of sexual orientation or gender identiy. At least 17 other states and the District of Columbia have civil rights law that prohibit discrimination based on sexual orientation or gender identity. Bardon's legislation would conform state law coverage to Indianapolis' human rights ordinance and the state's equal employment opportunity policy for state employees as provided by executive order. The civil rights protections would extend to such things as public and private employment, public accommodations, government contracting, insurance coverage and housing.
Many people may be surprised to learn that Indiana's current civil rights law was enacted in the early 1960s before Congress enacted the Civil Rights Act of 1964. Former Indiana Gov. Matt Welsh (D) was instrumental in the passage of progressive civil rights laws. As Welsh wrote in his book "View From the Statehouse":

Indiana has a situation that cried for effective action, and my administration made significant progress at a time of deepening national concern over the developing racial conflict. In view of our reputation as the most northern of all southern states, or the most southern of all northern, this is saying a lot. Few states at that time could boast of both racial progress and racial peace, but the good sense of Hoosiers and effective action by public officials and concerned private citizens produced results. No millenium was reached, but step by step the cause of decency was advanced, without doing violence to the person, property, or rights of anyone, white or black.

Welsh was elected in 1960 when religious intolerance was running high in Indiana because of John F. Kennedy's presidential candidacy and his catholicism. Welsh wrote of the time, "Religious intolerance was particularly vicious in the same cities where the Klan had been strong in the 1920s." "The sheets may have been changed, but the minds had not," he added. Welsh bravely laid out his civil rights agenda at the Madame Walker Theater in Indianapolis prior to the 1960 election. "We must act now to provide employment on the basis of ability," he told the crowd of African-Americans, noting that many businesses in Indiana discriminated in employment. He went on to defeat his Republican opponent, Crawford Parker, by 23,000 votes while Nixon carried the state over Kennedy by more than 200,000 votes.
It is interesting to observe that Welsh's initiatives in advancing civil rights received bipartisan support in the legislature. He credited support from labor, the Indiana State Chamber of Commerce and even churches for success in civil rights progress. As he summed it up, "Indiana's record was the result of a statewide effort of a truly concerned community and is a fine testament to the basic goodness of our people."
What Rep. Bardon proposes to do with HB 1716 is in the spirit of what former Gov. Welsh described as the "basic goodness of our people." The bill will no doubt face stiff opposition from the religious right, which has fought the enactment of local ordinances in Indiana tooth and nail, sometimes with success. In all fairness, though, HB 1716 is more important for symobolic purposes than its legal reach. Indiana's civil rights law, compared to federal and other state laws, is relatively weak. As an Indianapolis employment lawyer, Kevin Betz, recently described it:

Hoosier employees who want to bring a civil rights suit against their employer for discrimination face an insurmountable set of obstacles. To get a trial, the employee and the employer must agree in writing to submit the case to a judge. Most employers who have been accused of discrimination prefer to keep the matter out of court and refuse to consent to a trial. We were unable to find any case where an Indiana civil rights case has ever gone to trial under Indiana law. This is a testament to our State’s meaningless laws and the total void of any leadership in our State on this issue. Even if the employee can get the employer to consent, there is still no right to a jury trial. Even if the victim prevails in a trial before a judge or administrative proceeding, the damages are so limited it is a worthless undertaking.

While Indiana was a bit of trailblazer in the area of civil rights in the early 1960s, very little has been done to enhance them over the past 40 years. Many employment lawyers will agree that, if you can't bring a claim under federal law, the state law claim is hardly worth the effort. I hope Indiana's business and labor community can unite in its support of HB 1716, even if they can't agree upon supporting a strengthening of the law for enforcement purposes.
Posted by Gary R. Welsh at 5:07 PM

Great post, Gary. Jeb Bardon is a true friend to our community and an asset for the folks of his district.

Jeb is also low-key, and doesn't demand the spotlight. Altho he'll get it now.

And, he owns Subway restaurants! Yum.

Just another nail in the coffin. Government continues to advance the rights of special groups over that of private individuals. This will lead us toward the same path that Bosnia and Herzegovina went down. Oh well, it likely won't come about for another two or three decades.

Wow.. anonymous 8:19 must be right.. since Lafayette and Bloomington have imploded since their ordinances were passed OVER 10 YEARS AGO. I'm not talking Massachusetts or California-- where we GOOD OLE BOY HOOSIERS know everything is awful. But down-home Lafayette!

8:19, awwww come on. White christian men have been a "special group" for years and have basked and wallowed in their status. Why so selfish? Oh yeah, you want it to stay exactly like it is.