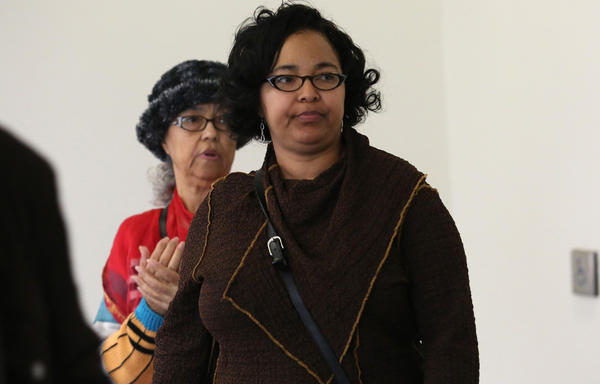 Cook County Circuit Court Judge Cynthia Brim knew how to work the system to her advantage. She used her status as a black female to get elevated to the bench by the corrupt Cook County Democratic Party despite a history of mental illness and lack of qualifications where she's been earning a $182,000 a year salary. Brim was suspended from her duties with pay in March, 2012 after she assaulted a deputy sheriff a day after she had suffered a complete meltdown in the traffic court she presided over during which she went on an extended rant that left a crowded court room in shock and had to be forcefully removed from her courtroom.

Because she was a Democrat, Brim was easily re-elected by voters in November 2012. That's when her attorney announced that she suffered from bipolar disorder to explain her irrational behavior. Brim agreed to a not guilty plea by reason of insanity in February, 2013. Incredibly, the Illinois Courts Commission waited another six months after her plea before filing a complaint against Brim seeking her removal from the bench. Brim fought the charges while sitting at home on her butt and drawing full pay and benefits by arguing that her irrational behavior could be controlled by taking medication for her bipolar disorder.

According to the Chicago Tribune, Brim had been hospitalized at least 9 times for her mental condition since 1994, although she claimed she wasn't diagnosed with bipolar disorder by her doctors until 2009. "I just broke like a pencil," testified Brim, who said she was feeling stressed that day because only one courtroom deputy was present for a busy call. "It was totally inappropriate for me to say what I did at that time -- or any other time." Her psychiatrist, Dr. Roueen Rafeyan, testified to the Courts Commission in her defense that there was only a 10% chance she would suffer another breakdown in court as long as she continued to take her medication. He told the Commission that there are heart surgeons who suffer from the same condition and operate on patients daily.

Don't shed a tear for Ms. Brim. Because she was removed from the bench for mental disability instead of gross misconduct as she should have been found, she will no doubt get to collect a six-figure pension check the rest of her life from the Illinois judges retirement system. There are also plenty of sleazeball attorneys who will stand in line to take a social security disability claim on her behalf since her mental condition prevents her from being gainfully employed in a job she would have never held but for affirmative action. The Obama administration will most assuredly approve her claim and pick up her attorney's fees as well. Brim will still probably spend the rest of her life complaining how the system mistreated her because of her race.

It's been more than a decade since the Commission has removed a Cook County judge. In 2001, Judge Francis X. Golniewicz was removed from the bench for lying about meeting residency requirements to serve as a judge in Cook County. His son was arrested in 2012 on drug-related charges as a member of a notorious street gang. Another judge, Oliver Spurlock, was removed in 2004 for grabbing and kissing deputy prosecutors against their wishes and having sex with a court reporter in his office. As an attorney, however, you can't criticize these folks wearing robes without risk of losing your license to practice law. Go figure. Welcome to America, land of the NOT free.
Posted by Gary R. Welsh at 4:35 PM

What needs to change is the judicial branch making its own laws governing itself.

The other branches of government are restrained by the laws passed in the ordinary legislative process.

An utterly unaccountable, autonomous and unchecked branch is a disaster.

Put all of the courts rules and licensing requirements under the legislature and the general state licensing office.

This is another example of "The Brethren" protecting their own. This nut case behaved in a manner that was outrageous and they gave her two years of free money, $364,000...and paid someone else to do her job at the same time.

It happened recently in Indianapolis where a judge behaved inappropriately and was paid for months at a very high rate by the taxpayers while The Brethren stalled even though a detailed finding of fact had been completed and a panel of masters had issued their recommendation.

If you can control your condition by being compliant with your meds
(according to her own psychiatrist), then she's not disabled enough to get SS unless her condition would deteriorate further. Her pension is a different story.

There are lots of people drawing social security disability for bipolar disorder, with or without meds.