Was this guy really a Marine? Mayor Greg Ballard showed off very minor bruising on the inner side of his left elbow to reporters today, an injury that is consistent with him striking it with the ceremonial green flag he was waving wildly for the benefit of the cameras in the pit area at the Indianapolis Motor Speedway at the start of the inaugural IndyCar Grand Prix race when a crash sent debris flying, though no visible debris landed in the area he was standing with a group of people, including several reporters and photographers. What some politicians won't do for media attention. I wish he was anxious to step before a legitimate reporter and answer some tough questions about how he's auctioning off the City in exchange for campaign contributions and gifts for him and his family while socking city taxpayers with higher taxes. 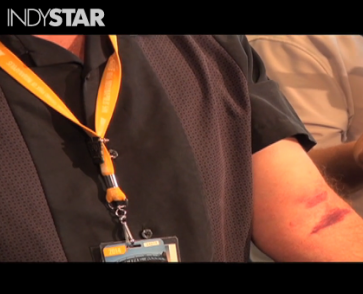 -I bet he'll submit a Workmen's Compensation claim with The City and claim that his boo boo was caused by the performance of his duties as Mayor.

Making a big deal about that little "owie" certainly is not fitting or customary for a Marine.

-It's more the behavior of a sissy.

Seriously, what a titty-baby, suck it up Marine and be glad your Saint Reagan didn't send you off to Beirut, Lebanon in 1983, like he did me. You'd be likely miking those injuries for years. Ballard, he's really worse than Goldsmith!

He went to the infield hospital for a bruise??? What a pussy!

I guess "Once a Marine, Always a Marine" isn't true in every case.

When he left the infield hospital his arm was bandaged all the way down to his hand. I was expecting a little more damage after that show.