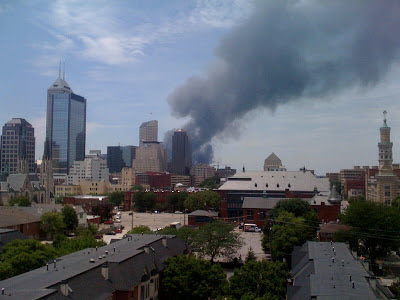 Black smoke emanating from a massive fire at National Recycling on Indianapolis' near west side became a part of the skyline from downtown most of the day after the fire broke out around noon. WTHR reports that as many as 200 area firefighters were called to the three-alarm blaze at 202 S. Belmont Avenue before finally getting it under control about 9:00 p.m. tonight. Residents living within a five block radius of the fire were temporarily evacuated from their homes due to environmental concerns. Pallets, aluminum siding, rubber, lumber and other materials were inside the main building that caught fire. A second building housing Shelter Distribution also caught fire. Ash from the fire was reported falling miles from the fire. Fire officials say the fire may not be completely extinguished until Monday.
Posted by Gary R. Welsh at 10:27 PM