Ballard Continues To Take A Beating Over CIB Issue 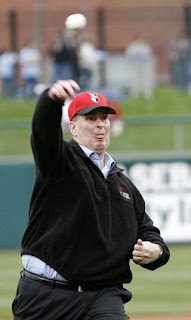 When the newspaper uses a photo like this of you throwing out the first pitch at the Indianapolis Indians game, you know somebody doesn't think much of you. Mayor Greg Ballard takes more punches from the "Behind Closed Doors" column in today's Star for his lack of leadership on the CIB bailout issue. "Many lawmakers publicly, but even more privately, wondered why Ballard has not been front and center pitching a proposal to fund the struggling board that runs the city's sports venues," the column reads.
Photo credit to the Star's Heather Charles.
Posted by Gary R. Welsh at 6:58 AM

As of 8:57 four readers have responded with comments at the Star's web site.
I can remember when Behind Closed Doors was widely read but that was when the Star was widely read.
Whoever writes it isn't a Ballard fan anyway I can't imagine many of his supporters as regular readers and we already know that Indy’s citizens seldom read more than the ad sections.
The photo could be disturbing to Molly the parrot for the short time it's lining her bird cage, but it will have little if any effect other than that.
It's a shame that Ballard couldn't cut the same deal as Peterson, final editing of any article related to the Mayors office. If I was Ballard the Star would loose access to Indy’s press room in the CCB and wouldn't be invited to press conferences. This is a cheap shot at our Mayor.
The Indianapolis Star continues to sink lower and lower.

Aside from the unflattering photo, is ANYONE impressed with the Mayor's leadership? Anyone other than Ernie, that is.

indyernie,
You are dead on right about the Star. Mayor Ballard was not part of the good old boys club when he shocked the pants off the Republican Party including the Governor and the Star.

The Governor rushed in and took control of the Stadium, finished it and then washed his hands of it now claiming the CIB, the Stadium, Conseco and all the players involved should be a "local" matter.

Mayor Ballard right now probably does not know what color of jersey to put on. The good old boys kept control of everything on the R and D side for years, they screwed it up and now need a scapegoat. If he asks too many questions and makes any suggestion they will most likely tell him he is too small for this journey and pat him on the head and tell him no good deed goes unpunished.

The Star staff has been told about these deeds before and they only report what the established good old boys want published.

The revolt in Indianapolis needs to be at the whole group of boys and girls and just not one person in the sand pile. Indiana needs a LEADER right now and all of them that profess to be are running for the hills and hoping the fecal material does not land on them.

Sensitive or not the Star, the Governor, the Legislature and the CCC need to become solution builders with the taxpayers and lead for once.

What do you expect from a rag that doesn't "do" religion.

indyernie - as of your posting, it was just after 9:00 a.m. on Easter morning. I'm going to take a leap and say people may have been doing other things at that particular moment in time.

Kelly its 2:07 PM now and I was the fifteenth person to comment at the Star's web site.
Church is over, it's too cold for the kids to hunt Easter eggs. Mothers across Indiana are preparing dinner and the Star's web site has had only fifteen commenters thus far....The Indianapolis Star isn't what it used to be, it has very low readership.

"What do you expect from a rag that doesn't "do" religion."

They sure sell the ad space at Easter and Christmas. Anything for a buck.

Vox, what examples of leadership are you talking about? I haven't seen any yet.

indyernie said...
This comment has been removed by the author.
4:37 PM GMT-5

Looks like the Star and Jim Shella have been comparing notes on hatchet job presentation.