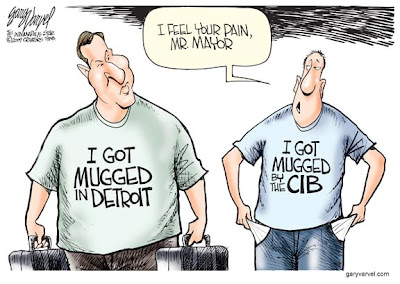 Star political columnist Matt Tully has some blunt words about Mayor Greg Ballard's handling of the CIB bailout and the need for Gov. Mitch Daniels to fill the vacuum. Tully writes:

Obviously, there's only one candidate for this job. And it isn't Mayor Greg Ballard. So far, Indy's mayor has had as much sway with state lawmakers as he does with Detroit pickpockets.

So who's the best candidate?

The man who has survived a series of intense political battles during the past five years needs to become the public face of yet another. The governor, who on Tuesday called this "a local issue," needs to put away such rhetoric and think a little more about what Indianapolis means to Indiana. And after saying this is a matter best left to state lawmakers, he needs to rethink his faith in the Indiana General Assembly.

Tully makes some other points about the end game of any bailout deal. He suggests any agreement to give more subsidies to the Pacers should include a lease extension. It doesn't matter how long the lease term is with these sports team owners. The lease itself has several loopholes that always give the team an out, while the City is penalized for breaking a lease deal. This is the case because the CIB has always been in the pockets of the sports team owners and negotiates on their behalf and not the taxpayers. Tully wants to stop the practice of team owners coming back to the well for more every few years, but it will continue to happen as long as the professional sports team owners are afforded exemptions from federal anti-trust laws and cities across America are willing to bid against each other for the right to have a team in their communities. Tully also wants the CIB to put its financial information online for public inspection and a town hall meeting at which taxpayers can discuss the issue. Both of these suggestions are good ideas. Tully might want to ask his own newspaper why it failed to include CIB/Indiana Convention Center employees in its online database of salaries for city and county employees.
Gary Varvel's latest creation shown above hits the nail on the head. Yes, the CIB likes mugging the taxpayers of Marion County at every turn.
Posted by Gary R. Welsh at 6:54 AM

All the CIB contracts need to be placed on line. The budget too. However, with regard to the budget,unless you know raw data behind the budget, where the figures are coming from, budgets are not necessarily that revealing and can be used to cover up problems.

We should know every employee employed by the CIB and their salaries. Has anyone tried to get this information? Contrary to a certain blogger's assertion, I've talked to two reporters who say CIB is to this day very, very difficult to get information from. They're hardly engaged in full disclosure because they open up their meetings to the public after making decisions behind closed doors.

Why do the details of Mayor Ballard's mugging in Detroit keep changing? What really happened?