Welcome To The Land Of Obama 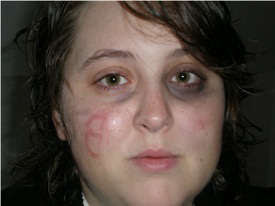 This Texas woman volunteering for John McCain in Pittsburg found out the hard way what happens when you cross the path of a mugger while visiting an ATM machine with a McCain bumper sticker on your car. It wasn't enough that her attacker robbed her. He also used a knife to carve the The One's initial "B" on her face. It's happening all across America. People who dare to express their public support for the McCain-Palin ticket are being assaulted or having their property vandalized by Obama's thugs. Is this the future we have to look forward to in America under an Obama presidency? No tolerance for dissenting views? Looks more like The One's cousin Odinga's Kenya than the United States of America where you lose an election, blame the Christians and then go burn their villages.

UPDATE: Pittsburg police report that Ashley Todd, the alleged victim, made up her story about being mugged and then branded with the letter "B" by her attacker. She could face criminal charges. Note that this young lady's psychotic behavior does not negate the fact that there have been numerous cases of assaults and vandalism to property conducted across the country by Obama supporters. Note also that Sen. Obama has never apologized to Sen. McCain and Gov. Palin for spreading false rumors that their supporters were chanting "Kill Him", referring to Obama, at McCain-Palin rallies at which the candidates spoke.
Posted by Gary R. Welsh at 11:32 PM

This is going to turn out to be fake. She's is just looking for her fifteen minutes.

Already got McCain to call her. Probably hoping for a leg up on a paying job.

People are scared that crime will skyrocket under Obama _and_ that Obama will do whatever he can to take away any and all guns. He supported Chicago's law that banned _all_ (not just assault, not just semi-auto handguns) firearms from the common folks. One had to rely on 911 and the CPD for protection. When seconds counts, cops are always a minute or so away. There has already been news reports of a surge in gun sales across the nation. People are in fear for their personal safety and they are taking steps to secure their safety themselves. The Indy 1500 Gun and Knife Show starts today. I wonder if it will be very busy?

This is stooping pretty low, even for Advance Indiana. Neither candidate has or would encourage this kind of violent behavior, and neither candidate would condone it. The was a despicable act of violence committed by an individual, not a candidate or a campaign.

There are supporters of McCain who would be all to happy to see the likes of me (hispanic, Catholic, acceping of all races and creeds) leave this country or become the victim of violence, but I don't attribute those radical views to McCain any more than you should attribute this incident to Obama.

Seriously, AI, the 'B' in question is backwards. Also, there were no witnesses to the crime and it was done outside the view of the camera. I am very suspicious about this, especially considering that she 1) refused medical treatment and 2) the 'B' is almost perfect, indicating that there was no struggle.

My bet is that she did this so people like you write stories about how mean Obama supporters are. Maybe that's the cynic in me, but unless someone can give a logical explanation I remain dubious.

Only one candidate has publicly told his supporters to "get in their faces." By making up stories, would that be the made up claims by the media and Obama that supporters at McCain-Palin rallies chanted the words, "Kill him," even though the Secret Service says it never happened.

The secret service never said it did not happen. They said they did not observe it. I didn't get to see Obama here on Thursday but that doesn't mean it didn't happen. I think we will find that this is just another campaign hoax.

First, the "B" is not backwards, it is upside down. Rotate the picture and you will see it as a regular "B".

Second, even the law enforcement community nation wide is gearing up for possible riots in the event that BO does not win:

BO supported Raila Odinga in Kenya, and the aftermath of Odinga's loss in the election was killings, burnings and civil violence. It ended only when a power sharing deal was agreed to between Odinga and the winner of the election, President Mwai Kibaki who won by 250,000 votes.

Obama has campaigned on an Alinsky message of "Change" and "Hope". He has stated that he wants to "spread the wealth around" and the it is only "fair" that the rich pay more. His basic mantra has been "From each according to his ability, to each according to his need" which by the way is what Karl Marx wrote in Critique of the Gotha Program in 1875. His plan to cut taxes for 95% of the American people rings hollow, due to his proposed spending and entitlement programs: free college, universal health care, rebates for those who do not pay taxes etc. Marx also wrote, “There is only one way to kill capitalism –
by taxes, taxes, and more taxes.”

BO has votes before to raise taxes on those making over $42,000 a year, hardly rich by any standard.

Despite what his campaign has said about his stance on guns, free speech, religion and so forth, look for him to appoint activist judges to the courts, ones that will change the face of the American landscape by judicial fiat, and begin restricting a myraid of our rights.

This country was not founded on the principles of "fairness" it was founded on the ideals that "[A]ll men are created equal, that they are endowed by their Creator with certain unalienable Rights, that among these are Life, Liberty and the pursuit of Happiness." Nowhere in the Declaration of Independence does Jefferson write that life is to be "fair." We have the "right" to pursue happiness. It is not a guarantee.

While not a supporter of McCain, the Republicans have become the Democrats of my grandparents, at least he is not an out and out Socialist. The Democrats, if truth in advertising was in effect, should rename their party as the "Democratic-Socialist" party.

This is not what the founding fathers envisioned for this "City on a hill" and I wonder what Washington, Jefferson, Adams, and the rest would think of where we are going as a nation.

This McCain supporter's story is now being investigated as a LIE:

Just thought it was interesting what supporters will do in attempt to grab a little fame. Sounds like another "Joe the Plumber" story - just simply false as usual!

----- "This is stooping pretty low, even for Advance Indiana. Neither candidate has or would encourage this kind of violent behavior, and neither candidate would condone it. The was a despicable act of violence committed by an individual, not a candidate or a campaign." -----

Exactly. 100 % agree, on all points. This is as bad as the people who cry "Grand Theft Auto" or "Marilyn Manson".

The original story is a joke. The update is still a joke.

It also makes me think of a nice quote by Theodore Roosevelt:

"We grudge no man a fortune in civil life if it is honorably obtained and well used. It is not even enough that it should have been gained without doing damage to the community. We should permit it to be gained only so long as the gaining represents benefit to the community. ... The really big fortune, the swollen fortune, by the mere fact of its size, acquires qualities which differentiate it in kind as well as in degree from what is possessed by men of relatively small means. Therefore, I believe in a graduated income tax on big fortunes, and ... a graduated inheritance tax on big fortunes, properly safeguarded against evasion, and increasing rapidly in amount with the size of the estate."

Yeah, strange what supporters will do. Doesn't somebody faint at nearly every Obama rally? I thought I was seeing a replay of the one here last May.

But it seems to be s regularly-scheduled part of the act. Or perhaps it's real and the people are merely having a religious experience at the 'tent revival?'

1) Fox News now says she admitted to making up the story.

2) The people better be ready for riots even if The One wins. Look at how blacks act after winning a major sporting event.

No, that is NOT racist. It is a plain, simple fact.

Joe the Plumber is NOT a phony story.

The actual video of The One discussing it with Joe is on You Tube.

We've all seen the Joe the Plumber clip(s) if we turned on a TV within the last week or two. No one is saying that it doesn't exist.

I believe tarrandwoolley's point is that Joe the Plumber is a hypothetical.

Joe Wurzelbacher does not fit the criteria of the Joe the Plumber (ha!), but he did question Obama for those who are in the situation that Joe himself hopes to one day be in.

That's the facts. From there, depending on your views of Obama and McCain's plans, you can debate the issue.

1. The police have now admitted that it was a made up story.

2. Much of Joe the Plumber's story has turned out not to be true....he is not even a plumber. A radio station took up a collection to pay his overdue taxes.. sounds a bit like socialism to me!!!!!!

Don't bring up the Kenyan elections if you don't know the facts. BO supported Odinga, yes. But most international observers confirm that the elections were highly suspect, and the fact that Kibaki "won" is highly debatable.

Don't really try to tie the Kenya elections to Obama. Those riots were about the failed legacy of neo-colonialism and tribalisim in Kenyan. Not BO

Let's get above the rhetoric and the nonsense.

"Concerned Taxpayer" (aka Mike Jerziersky) must be talking about all those European sports hooligans that riot so notoriously after European soccer games. White people are just naturally riotous, eh Mike? The English are especially bad about sports hooliganism...

Concerned Taxpayer, I did not realize there was still a debate. The fact is Joe is real, but his actual story, as told by McCain, is false, a lie.

Obama's answer was VERY real. It doesn't matter who asked the question.

I wouldn't say "misdirection". I'd just say that a lot of people don't sweat the graduated income tax.

Most people don't make $200,000 so the idea of "those people" getting taxed at Clinton levels, when the economy seemed better off than it is now, isn't a situation worthy of freak out.

We have Obama saying it (graduated income tax helps) now. We have videos of McCain (back when he was a maverick!) saying it. We have US leaders, like Teddy Roosevelt, from its history saying it.

I'm not saying it's necessarily a good thing. That's for the people, economists, etc. to decide. I am saying that I think you're mistaking apathy for misdirection.