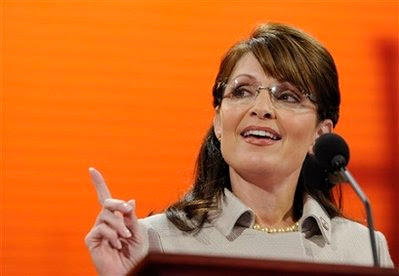 Move over Barack Obama. There's a new political star in America. And she's the real deal. Any doubts about John McCain's choice for vice president were pretty much laid to rest tonight as Gov. Sarah Palin stole the show and won over the hearts of millions of inspired Americans. Here's a gal who talks their talk and walks their walk. She speaks from the heart with conviction. Self-assured but not self-absorbed. Tender spoken but tough as nails. Thank you, John McCain for looking forward and not back.
Some of my favorite passages in her speech tonight:
On Family
Our family has the same ups and downs as any other ... the same challenges and the same joys. Sometimes even the greatest joys bring challenge.
On Her Experience
Before I became governor of the great state of Alaska, I was mayor of my hometown. And since our opponents in this presidential election seem to look down on that experience, let me explain to them what the job involves. I guess a small-town mayor is sort of like a "community organizer," except that you have actual responsibilities. I might add that in small towns, we don't quite know what to make of a candidate who lavishes praise on working people when they are listening, and then talks about how bitterly they cling to their religion and guns when those people aren't listening. We tend to prefer candidates who don't talk about us one way in Scranton and another way in San Francisco.
Blasting The Media Elites
I'm not a member of the permanent political establishment. And I've learned quickly, these past few days, that if you're not a member in good standing of the Washington elite, then some in the media consider a candidate unqualified for that reason alone. But here's a little news flash for all those reporters and commentators: I'm not going to Washington to seek their good opinion - I'm going to Washington to serve the people of this country. Americans expect us to go to Washington for the right reasons, and not just to mingle with the right people.
Ethics and Ending Business As Usual
Sudden and relentless reform never sits well with entrenched interests and power brokers. That's why true reform is so hard to achieve. But with the support of the citizens of Alaska, we shook things up. And in short order we put the government of our state back on the side of the people. I came to office promising major ethics reform, to end the culture of self-dealing. And today, that ethics reform is the law. While I was at it, I got rid of a few things in the governor's office that I didn't believe our citizens should have to pay for. That luxury jet was over the top. I put it on eBay. I also drive myself to work. And I thought we could muddle through without the governor's personal chef - although I've got to admit that sometimes my kids sure miss her. I came to office promising to control spending - by request if possible and by veto if necessary.
On The Hollow Obama
This is a man who can give an entire speech about the wars America is fighting, and never use the word "victory" except when he's talking about his own campaign. But when the cloud of rhetoric has passed ... when the roar of the crowd fades away ... when the stadium lights go out, and those Styrofoam Greek columns are hauled back to some studio lot - what exactly is our opponent's plan? What does he actually seek to accomplish, after he's done turning back the waters and healing the planet? The answer is to make government bigger ... take more of your money ... give you more orders from Washington ... and to reduce the strength of America in a dangerous world. America needs more energy ... our opponent is against producing it.
In politics, there are some candidates who use change to promote their careers. And then there are those, like John McCain, who use their careers to promote change. They're the ones whose names appear on laws and landmark reforms, not just on buttons and banners, or on self-designed presidential seals.
Posted by Gary R. Welsh at 9:59 PM

MSNBC's Keith Olbermann is showing his backside as usual. He said Palin was too sarcastic and likened her to Harry Potter's Dolores Umbridge. If you're not a Harry Potter follower, here is a rundown of her character:

"Dolores Jane Umbridge was Senior Under-Secretary to Minister for Magic, Cornelius Fudge. In her ambition for glory, she climbed her way to Professor of Defence Against the Dark Arts, High Inquisitor and Headmistress of Hogwarts. During the height of the Second Wizarding War, Umbridge ran the Muggle-Born Registration Commission while Lord Voldemort was in control of the Ministry, and sadistically prosecuted many innocent people. She is currently incarcerated at Azkaban for her crimes against Muggle-borns."

John McCain is about to do for himself tomorrow what Barack Obama has been unable to do for 19 months.

I gave her an A- for overall presentation - she had a few bobbles in the middle of the speech.

I gave her an A+ on the meat of the speech.

Some are saying that MSNBC reported that Palin and Guliani both had issues with the teleprompter. It kept scrolling during the applause. If true, her presentation was even better than an A-!

I always felt Olbermann was targetting a younger audience. This confirms it. He should at least direct his political patter to those who have attained voting age.

She is one mean spirited mean person.

" artfuggins said...
She is one mean spirited mean person."

Yea, not like Obama, Biden, every MSM left-leaning, liberal talking head, and wilson.

Oh come on Art, you can't really believe that? Let me guess, she is clinging to her guns and religion right?

What is mean spirited in the unabashed misogyny coming form the Democratic party.

There is an energy around Sarah Palin not felt on this planet since before Diana's death.

Obama is still looking for his testicles this morning.

Seriously, what we witnessed last night was one of the greatest convention speeches of American History. The person, the setting, the circumstances, the political theatre..... all conspired to introduce to the country and to the world a new American political giant.

Much like the Cross of Gold speech in 1896 brought forth William Jennings Bryan, and the 1964 speech by Ronald Reagan (not actually a convention speech) foreshadowed his future in American politics, Sarah Palin's speech will, I believe, be looked back upon as the one that started her long, productive, and popular career in GOP and American politics.

I have little doubt that Palin will be America's first ELECTED female President. I have no doubt that Barack Obama has been permanently diminished by her last night. He is, I believe, headed for the Democratic political dustbin already inhabited by the likes of McGovern, Dukakis, Mondale, Gore, Kerry, et al.

Sarah Palin, in her middle America homespun way, pointed out that the Emperor has no clothes, and is, in fact, by all objective measure, kind of a joke.

By November 4th, most Americans will come to the judgment that they would, by far, rather have Sarah Palin as US President than Barack Obama.

Just as the British liberal elite mocked the "spiteful grocer's daughter" in Great Britain in the 1979s, so are their US counterparts now discovering America's answer to Margaret Thatcher.

To Wilson, Art and all the others that claim her lack of experience is a major reason to not vote for McCain some interesting info from the Ludwig von Mise Institute (http://blog.mises.org/archives/008449.asp):

Credentialism is certainly rampant in this country, driven as it is by the growth of the state. Yet the vice presidency of the United States remains an office where credentials seem to have little or no meaning. Consider the following parade of major party vice presidential nominees:

This list covers nominees who never held a major federal or statewide office. But there are plenty more dazzling resumes, even in recent times:

Make sure you read through the list, it contains BOTH Dem and Republican VP candidates. Palin is not running for POTUS, McCain is. She did a great job last night, as evidenced by the screeching put forth by the MSM and Obama's people today.

My next question is: How long will it take BO to dump Uncle Joe and sign Hillary on as VP to counter Palin?

Good info, Shofar. Thanks for sharing.

You're comparing Sarah to Margaret Thatcher? A woman who worked her way up through the ranks and won on her own? Built party and ideology and helped defeat the Soviets with her backbone to Mrs. Bridge to Nowhere?

Seriously, you guys need to stop doing the meds.

Had it not been so divisive, I would have deemed it an excellent speech without qualification. Because of its us versus them overtones, I can just call it a great "red meat for red state" speech. I have more on this at www.ipopa.blogspot.com.

I wanted to confirm that the teleprompter was jumping. A reporter who was on NPR yesterday said he was watching it, and on a few occasions, the teleprompted would jump ahead.