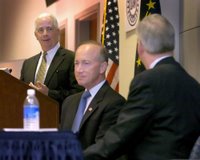 Gov. Mitch Daniels (R) and Mayor Bart Peterson (D) rolled out the Rolls-Royce of all give-aways when the two announced an incentive package to the Rolls-Royce Corp. to add 600 new jobs over an 8-year period at its westside Indianapolis plant for what is being called a "center of excellence." The Indiana Economic Development Corporation is writing a check out to the multi-national corporation for $17 million, while the city is going to forgive the company for $11 million in property taxes it would otherwise be required to pay for local government services. That's about $50,000 a job to a company which has been cutting jobs at this plant over the past several years. And only 150 jobs will be added in the next 2 years; the remaining 450 jobs will be phased in over an 8-year period.

Here's where it gets even better. Steve Dwyer, Rolls-Royce's Indianapolis COO is still trying to figure out what kind of jobs he's going to create. The Star reports that "the exact type of new jobs and the focus of the new center of excellence have yet to be determined." Gov. Daniels says he was really only concerned about preserving the jobs that are already there. “We started talking about limiting the shrinkage, and wound up talking about growing high-paying jobs in the state,” Gov. Mitch Daniels said. “There were a lot of points in between when it looked like it might not work out.”

Rolls-Royce of course is a leading defense contractor, and we know how efficient defense contractors are with our hard-earned taxpayer dollars. The company mostly produces jet engines at its westside plant, so most of the money going into the plant to build those jet engines comes from the federal government. The jobs at the plant are good-paying jobs, as much as $75,000 on average. One should question, however, whether this incentive package was at all necessary. It appears to me that the state was actually the one who initiated the conversation with the company, and Dwyer, who's obviously no fool, simply said, "you got money to give away, sure I'll take it, tell me what I need to say."

Meanwhile, the City of Indianapolis will have to shift more taxes on to the backs of working class citizens to pay for the loss of tax revenues it's giving up to the corporate giant so it can pay for police, fire, parks and other important city services for which it's already short on funds. It's just more welfare for the rich at the expense of the little guy.
Posted by Gary R. Welsh at 8:06 PM

Brody--what about all the jobs they cut over the past several years. We're actually paying money to get back jobs they've already taken from the local economy. And remember--they have 8 years to add up to 600 jobs. The check for $17 million is in hand today--think about the interest on that money.