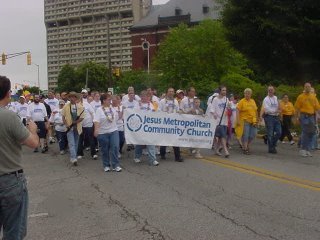 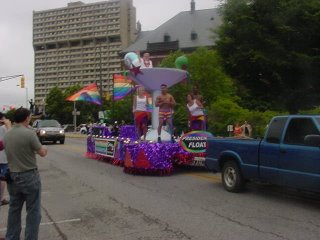 The rain held off long enough for the conclusion of the IN Pride 2006 Parade, which boasted a record number of entrants--more than 70. But soon after the opening of the Pride Festival in University Park the ran began and persisted throughout the day. Die-hard Pride-goers nonethless endured the rain through to the closing performance by singer/entertainer Rupaul to make it one of the largest attended Pride events in the history of the event.

Special recognition in today's parade goes to the Jesus Metropolitan Community Church, which turned out more than 100 of its faithful to march in today's parade. They were successful in distributing a lot of those now-famous yard signs posing the question, "Would Jesus Discriminate?"

A special thanks to the hundreds of attendees who stopped by our booth today to sign petitions opposing state legislation to bar gays from adopting and fostering children. Sen. Jeff Drozda, the chief proponent of the legislation, is becoming as well known in Indiana's GLBT community as Eric Miller and all that that implies.

Many politicians attended today's event, including Congresswoman Julia Carson (D), who rode on the grand marshal's float with several survivors of breast cancer. Her Republican opponent, Eric Dickerson was a notable no-show. He had told Pride organizers he would participate in the parade, but he failed to show. Sen. Billie Breaux (D), Rep. Ed Mahern (D) and Rep. David Orentlicher (D) attended, along with state senate hopeful Russell Brown, who is opposing Sen. James Merritt (R) and representative candidate Susan Fuldauer (D), who is opposing House Speaker Brian Bosma.

A special thanks to Melina Kennedy and Russell Brown for stopping by our booth today to say hello and put the good word in for their campaigns. Democrats clearly out-flanked Republicans at today's event
Posted by Gary R. Welsh at 8:20 PM