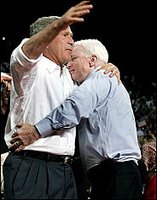 PageOneQ reports that Sen. John McCain (R-AZ) is defending the "Don't Ask, Don't Tell" policy regarding the service of gays and lesbians in the U.S. military. McCain is quoted as saying:

"All the senior members of the military say that it's working." When asked directly if he would vote for Massachusetts Congressman Marty Meehan's bill (H.R. 1059) to repeal the Don't Ask, Don't Tell policy, McCain said, "No."

PageOneQ notes a February Washington Post story which reported that the military spent $363 million enforcing the "Don't Ask, Don't Tell" policy. According to the Government Accountability Office, 9,500 service members have been dismissed from the military since 1993 because of their homosexuality.
Posted by Gary R. Welsh at 10:20 PM