Progress Seen In Media Coverage Of IN Pride Festival & Parade 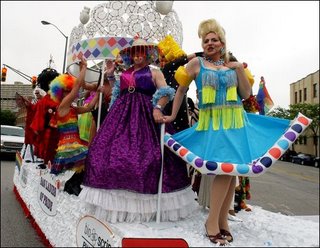 If the amount of news coverage of the IN Pride Festival and Parade is any indication, Indiana's GLBT community has made a lot of progress. For the first time in memory, the Indianapolis Star afforded the weekend event the sort of coverage it typically provides to an event of similar size and stature. Indy's weekly alternative, Nuvo, offered several pages of coverage including a guide to the event.

The parade was the day's biggest event. About 25,000 people witnessed and participated in the annual celebration of Indianapolis' gay community.

They had at least two reasons to celebrate: On Thursday, the U.S. Senate rejected a constitutional amendment to ban same-sex marriage. In December, the Indianapolis City-County Council passed Proposition 622, a measure to protect against discrimination based on sexual orientation and gender identity.

The 25,000 attendees noted by Tan probably hits the mark. That's about the same number University Park officials released last year. The attendance was remarkable for no other reason than it rained pretty much throughout the festival. As the Star headline remarked, "Despite the rain, pride has its day in the sun."

It wasn't a day in the sun for Pride coverage as far as Indianapolis area televisions stations were concerned. Had you turned to your local television station to find out any information on yesterday's festival and parade, you would have been left out in the rain. WTHR-TV's coverage of weekend activities yesterday pretty much told the story. There was news about the Hot Rod Nationals at Raceway Park, the Talbott Street Art Festival and the Latino FunFest in Military Park, but not a single mention or video coverage of the 25,000 people gathered in University Park for IN Pride. It is notable that a disproportionate number of people working on-air in the news rooms at these television stations are family, a fact well known to most members of the GLBT community. Unfortunately, most of these individuals are extreme closet cases. Are they so self-loathing that they would intentionally deny coverage to a news-worthy event?
Posted by Gary R. Welsh at 7:50 AM

"Unfortunately, most of these individuals are extreme closet cases. Are they so self-loathing.."

Self-loathing my *ss. Surely, you meant to say self-serving.