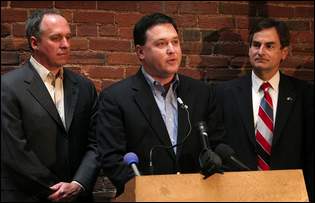 A popular campaign button at today's Indiana Republican Convention read, "Pro Life, Pro Gun, Right Wing Christian: Any Questions?" according to the AP's Mike Smith. Apparently that was the predominant sentiment at today's convention at which three white, Christian males were nominated to lead the statewide ticket, joining another white, Christian male nominated in the primary, Sen. Richard Lugar. Chris Douglas, a gay delegate to the GOP convention, shares his disappointing experience of "What Became of the Republican Party My Parents Knew?" over at Bilerico:

How polluted that clarity has become. I have heard the podium of the Republican Party speak of the value of diversity, but saw a party platform before me that as a matter of official policy seeks to alienate gay citizens from the equal protections of the Constitution and of the courts that enforce it. I have heard the podium speak of respect for all, but disgrace itself with a recurring and insulting indulgence in sectarian prayer.

The founding fathers pledged their lives, fortunes, and sacred honor to establish a society of rights. To any Republican who might read these words, indeed to any Hoosier, I hope you are aware that you have an obligation personally to combat the prejudice that in your name too seeks to dominate the levers of government in Indiana, a prejudice which is achieving a historic level of influence. How can you honor the founders, indeed the troops that seek to establish rights abroad, if you
yourself do less to protect freedom from the threats brewing here?

I have no regrets as a life-long Republican in choosing to skip this GOP event, or any other event the party hosts in the future until it finds a way to welcome folks like me, Douglas and others to the table. I have served as a delegate in the past to the national convention and state conventions in both Illinois and Indiana. I have contributed thousands of dollars to the party and volunteered thousands of hours to help elect its candidates, but none of that matters in this state as soon as they learn what your sexual orientation is. What a pathetic bunch of bigots the Indiana GOP has become. Doesn't look like the First Republicans have made any progress since their formation last year.
Posted by Gary R. Welsh at 7:43 PM

I saw Chris' post, which I thought was eloquent--and sad. I came to the same conclusion shortly after GWB was installed in 2000--after 35 years working hard for the Republican party. These are NOT the people I knew when I was active--the Marion County GOP under John Sweezy was welcoming to this Jewish girl, and I never heard anti-gay comments (and very few anti-black ones) back then. It isn't just the Indiana Republicans, either--listen to the Rick Santorums, the Tom Delays...the whole crew. People like me didn't leave the GOP--the party we belonged to no long exists. The question is, do American (and Indiana) voters realize how dangerous these people are? Because they aren't just buffoons, although they are certainly that. They are religious totalitarians.

Check out the Libertarian Party of Indiana. Our activists are of all stripes including Jewish, African-American, Gay, Methodist, Independent Baptist, Scottish, etc., etc. We believe we should be able to live our own lives. Check us out.

The line any questions? leaves you no real choice does it? Swallow the right wing nuttery and stay in the closet or be proud hold you head up and go find another political organization who does affirm you.

I did it looking at the Roman Catholic Church and my own life. It takes a long hard look at what you are willing to put up with. If you're not willing, get out and o not look back and fight against these strange people iwth other political clout.

The first anonymous has it right, dangerous men walk those floors and you understand that these people never really wanted you ever.