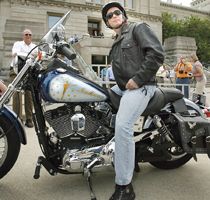 It first appeared that Gov. Mitch Daniels (R) had suited up in his leather and hopped on his Harley in preparation to ride with the gay bikers in the IN Pride Parade tomorrow morning, but I guessed wrong. Daniels did not accept his invitation to attend the Pride Parade and Festival. He did, however, accept an invitation to ride with a group of 30 bikers from ABATE to help raise safety awareness. The Governor was headed up to South Bend tonight, and then over to Merrillville tomorrow.

Indiana's GLBT community will have to settle for a letter sealed with a kiss. He writes to Pride Fest attendees:

Pride Celebration is an event that brings together people from across Indiana who share characteristics that unite all Hoosiers, families and members of families alike. Indy Pride demonstrates the diversity not only of the gay, lesbian, bisexual and transgendered community, but of Indiana, a state that is home to people of all races, religions, and national origins working together toward a bright future.

As the GLBT community intersects with all communities, Hoosiers are becoming ever more appreciative of your contributions to Indiana's past and future. May today's event be another successful building block, encouraging a strong spirit of fellowship among all who attend.

On behalf of all of Indiana, welcome to our capital city for Pride 2006.

Mayor Peterson's schedule will also keep him away from Pride just as it has every year he's been in office. You can bet, though, that he'll work the Italian Street Festival and Latino Family Fun Fest into his schedule tomorrow. Mayor Peterson, whose administration has always been accomodating in closing streets and what-not to make the parade and festival possible, also penned a letter of support. He boasts of his own executive order and the city's new Human Rights Ordinance "to help promote an equal and integrated city." He adds, "Best wishes for a wonderful festival!"

It really is pathetic that otherwise supportive politicians in Indiana are still terrified of attending a gay pride celebration for fear that someone might photograph them with a bunch of gays. If you travel to Chicago, you will find the Governor, Mayor, U.S. Senators, Congressmen and virtually anybody that's anything marching in the parade to show their support for the GLBT community. Indiana still has a long way to go, but it has made significant strides in a few short years.
Posted by Gary R. Welsh at 3:20 PM

in 1998 incumbent Congresswoman Julia Carson arrived at Gay Pride to speak but some organizers opposed her -- saying it'd make the event too political and maybe "partisan". Considering her GOP opponent was antigay winger Gary Hofmeister, a Solomonic decision was made that he too would be permitted to speak, should he wish to. He didn't attend.

At least since Gary Brackett has been president, it has been the policy to allow any politician to enter the parade who wants, and each is introduced and allowed up to 2 minutes to speak. This has included both Ds and Rs, though mostly Ds. You won't see that happening at an Advance America or AFA event.

I helped pen the Mayor's welcoming letter so blame me for promoting what he did with his first executive order adding sexual orientation and his second adding gender identity. Maybe we should collaborate on the letter next year, Gary.

I was in attendance at a meeting with the Mayor this past Monday. He makes it a point of meeting with a small group of LGBT individuals on a quarterly basis. Yes, all D's...but Goldsmith had an opportunity to meet with the R's...did it ever happen?

Yes, we want our elected officials to do more to make our lives better. The Mayor did give the welcoming speech at the 2001 Lambda dinner and Governor Kernan gave the welcome at the 2004 dinner. Baby steps. Let's see if either the Mayor or the current Governor show at the dinner this year. Both have been invited.