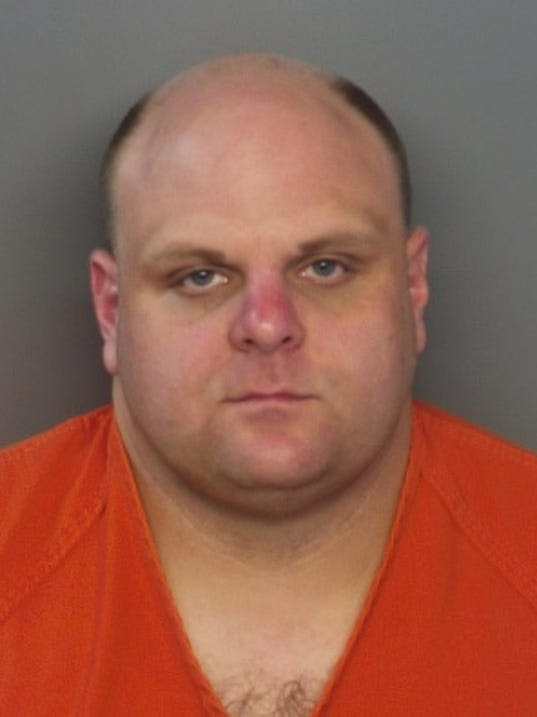 A 7-year veteran of the Marion County Sheriff's department, Deputy Jed Adams, has been arrested in Plainfield on suspicion of drug dealing and official misconduct. A report by WTHR says Deputy Adams had marijuana, cocaine and methamphetamine in his possession at the time of his arrest. Deputy Adams worked as a K-9 handler in the criminal division of the sheriff's office. The Indianapolis Star reports Sheriff John Layton fired Adams immediately upon learning of his arrest. Adams apparently was nabbed when he went to a meeting with a drug informant in Plainfield at 1:00 a.m. this morning where he supplied the informant with drugs.
Posted by Gary R. Welsh at 4:29 PM

And this pig arrested hundreds or more for the very same crimes he committed. Probably wanted to eliminate the competition.

So how many years has this been going on??? And only got caught by chance. Layton, your house is a mess.

Just what are the Marion County Sheriff responsibilities after the merger? Why do they have K-9's? They can't patrol like before. Why are there hundreds more deputies now than before the merger? Why isn't more of their budget pulled and given to IMPD who actually do the law enforcement work in Marion County?

I know this guy...never trusted him. He was also a leader in his church and choir...another upstanding Christian church guy and cop. Unfortunately, he has several small children. That is what angers me is that trash like this preach one thing, bring children into the situation, and ruin so many lives. Forget about the politics, etc...these (very) small children's lives were ruined...I came from it, but luckily found a way out.

If he has small children, it is a shame he did not think of them and his wife before he did something this stupid. The MCSD has a history of deputies with drug issues. This guy was on the "street" when the MCSO has no reason to have street level law enforcement. It is a pipe dream, but I hope the citizens of Marion County wake up soon.

The Merger" eliminated Sheriff John's Law enforcement responsibilities. The financial savings were never realized because he refused to follow the law as it applied to his Department's responsibilities, instead ignoring the law and building a "pretend army" of gun-toting pretend police. Read all of the statutes and county ordinances that apply and you will determine that MCSO deputies have no powers unless they are on the clock preforming the duties that they were "specifically" hired to do. They do not even have the authority to carry a gun off-duty and lack Indiana certification to make arrests. When will the tax payers of Marion County wake up and care that this farce continues to exist. Sheriff John engineered the "Merger" and is the cause of the problems it has caused and the savings not realized. Wake up folks!

The sheriff shouldn't have a Criminal Division according to the merger laws that effect the IPD/MCSD merge. Yet, he has more than 400 vehicles with no law enforcement responsibility and no certified law enforcement officers. If you follow the blog Citizens Against Marion County Sheriff John Layton you will see that he lacks any real ability to function as a public servant or administrator of any public agency.

Just like the national media protects Obama, Clinton and their likes, the local media protects the Democrats, if Layton were a Republican, he would be a page 1 story every night, but, the dirty little secret is their in bed together!

If drugs were legalized, the black market for them (and the associated crime) disappears over night.

did he shakedown anybody?

I always thought this guy was dirty we'll my suspicions were correct. Dumb ass!!

His K-9 dog was donated to the MCSO by.... his family. Way to create your own position. LOL crooked, crooked.