Star Reporter: Law Enforcement Pulled Out All The Stops For This Press Conference 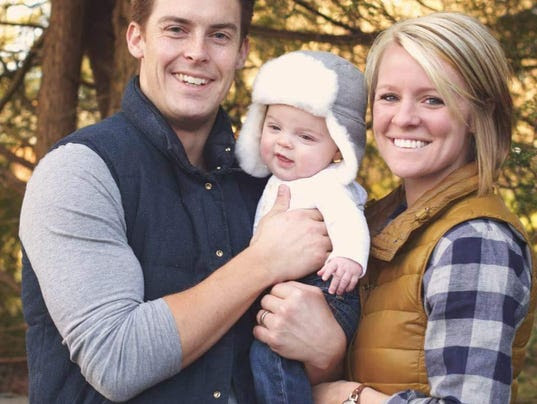 This past week's tragic killing of Amanda Blackburn, the lovely young wife of local pastor, Davey Blackburn, and mother of a beautiful son, during an alleged home invasion in a quiet, northwest side neighborhood where major crimes we see in other battle-ridden Indianapolis neighborhoods rarely happen, has reverberated throughout the city and has drawn international press coverage. This morning, IMPD Chief Rick Hite and a bevy of federal, state and local law enforcement officials conducted a press conference at which they reassured the public ample resources are being made available to solve this horrific crime. As Indianapolis Star reporter Jill Disis tweeted, "Law enforcement pulled out all the stops for this press conference.

Law enforcement pulled out all the stops for this press conference. pic.twitter.com/LlNKYTyCzH
— Jill Disis (@jdisis) November 13, 2015

I've held back commenting on this latest in a long string of homicides this year in Indianapolis. The intentional taking of human life is awful regardless of the victim's socio-economic background. There are a lot of facts that don't add up to critical thinkers. IMPD, which has released very few details about the shooting, has ruled out Blackburn's husband as a potential suspect in her killing. Police say his alibi of being at a local LA Fitness at the time of the shooting checked out. Commenters on social media and news websites have been less than charitablee towards Blackburn's husband. Last night, Jeanine Pirro, a former prosecutor and Fox News commentator, unloaded on a statement Blackburn released. Pirro told Fox News' Megyn Kelly that she was taken aback by his statement being more about him than his deceased wife. I don't know what Pirro knows that local police haven't come across, but she says her years of work as a prosecutor leads her to look inside the home for answers in this type of killing before looking elsewhere. I believe the fact IMPD has released so few details about the killing has resulted in the public focus on Blackburn. There are rumors Amanda was raped during the home invasion, but police have not confirmed that detail or whether DNA evidence may have been recovered from the crime scene. What we know is that she died from a single gunshot wound to the head.

I've had the chance to view a lot of videos posted online by Blackburn regarding his church-related activities. He likes to talk a lot, and he's a very good talker. When he and his wife appeared together, he would ask her to talk and then repeatedly interrupt her, which appeared to be a source of irritation with her. I would describe him as having an incredibly charming, charismatic personality and having a good eye for fashion. One particular video that Blackburn posted on YouTube addressed to his church's core volunteers caught my attention. He talks at length about the nuts and bolts of building the church, including the financial angle, reassuring volunteers all money raised was for the benefit of the church since it was a non-profit organization. He seems almost obsessive, compulsive about his approach towards building his church, although it's obvious he has been very successful at convincing people, including many young couples, to join his church. Those members have recorded video testimonies about how Blackburn's church has turned their lives around. Blackburn openly discussed his marriage with his fellow parishioners and what they do to keep their relationship and sex life strong, particular after a child comes along.

When you look at all of the photos the couple posted of themselves online with their one-year old son, Weston, and the family dog, it's hard to imagine anything bad was going on inside the cozy-looking home the two moved into after relocating here from South Carolina in 2012. Police are focusing on an unidentified, young, African-American male wearing a hoodie, who was captured on surveillance video walking near the Blackburn's home that morning. There was also a dark-colored SUV spotted in the neighborhood that morning. Police say there was another home break-in near the Blackburn's home that same morning, which could possibly be tied to Amanda's killing. Chief Hite says there was no forced entry into the Blackburn's home. Let's hope police are successful in capturing and bringing the person or persons responsible for this crime to justice. As close together as those homes sit in the Blackburn's neighborhood, it's surprising the sound of the shooting itself didn't get a neighbor's attention. The killer or killers could be looking at an extra penalty since Amanda was pregnant with the couple's second child when she was shot and killed this past week.

We've exchanged messages on this topic. I'm very familiar with that neighborhood as I bike through it. It is a very safe neighborhood and actually very isolated from bad neighborhoods or commercial establishments. You'd have to make a deliberate effort to get to Wynnedale if you were going to burglarize homes there.

I originally thought the supposed break-in happened on Saturday, but actually it was Tuesday. That's even more suspicious. Who burglarizes a home at 8:30 in the morning when people are coming to and leaving work? You're almost certain to have witnesses. And the last thing a burglar generally wants is to confront a homeowner. That's why they case houses to find when they're on vacation, when they leave for work. They don't want confrontations.

I don't know what happened. But I do know that for this murder to have been done by a complete stranger breaking into the house would be an extremely rare event.

The fact-of-the-matter is that this horrendous murder, as well as all the others, and a steady rise in violent and other crimes in Indianapolis-Marion County, falls squarely on the shoulders of Mayor Ballard, the City-County Council, and the over-paid, self-serving public safety directors and chiefs of police. How much more will local residents allow these crooks to FAIL us?

THESE TRAGEDIES MUST END! And, I don't think the next wave of downtown insiders set to take over in January will do much to stop this tidal wave of violence.

Mr. Welsh and Mr. Ogden: I know the other individual who lives down the street from this victim and whose home was burglarized that same morning. Apparently, the burglary of this individual's home was awful, and could have ended in a similar tragedy if they had been home when it occurred. Thankfully, in this person's case, lots of replaceable items were taken.

My question is this: whatever happened to noisy neighbors?

I know what you mean, anon. The subdivision in the small town where my parents live is abuzz every time anyone who looks out of place is driving through the neighborhood.

I think its a case of criminals getting more brazen. After all they know the ranks of IMPD are too thin to patrol neighborhoods regularly.

I wonder why the burglar hit those two houses that morning?

Someone wanted to rape and kill a white woman.

This is the consequence of the Left demonizing Whites, for decades.

This press conference was for the cameras and designed to protect the city's national reputation, nothing more. Hite, Ballard and the whole lot of these losers have been asleep at the switch as this city has descended into mayhem. They have done nothing. The only reason they are doing anything now is that this story is so abhorrent that it has gained a national audience. The comments by posters accusing the husband are symptomatic of the sickness so prevalent in this city. These people filled with utter contempt and hatred are our neighbors, people we share the roads with, the folks sitting next to us in a restaurant. I am repulsed by the show. COmpletely and utterly repulsed.

Anon 547, Ballard, the CCC and their team of worthless hacks have not been asleep at the wheel, they've been too busy lining their own pockets via crony development deals, make work jobs, and chasing lame gimmicks like blue Indy. Basic services such as police are not just unimportant to these people, they are pesky overinflated budget items that have to be continuously cut back so more the city can have more shiny new apartment buildings and Ballard cars.

just like when the south side explosion happened, this crime SEEMS like an inside job.
Maybe the police are publicly saying hubby is cleared to put him at ease so he will get comfortable and cocky and screw up somehow while they continue to investigate him...

Who knows. A sad and horrible crime.

Anon 547, the problem is, other than the gross crime itself, is that it often turns out to be the husband or wife in these cases. Hopefully whoever did it left enough evidence to get them arrested, if not clear the innocent. Most criminals who murder don't start out as murderers, they often have a long record of police interaction that builds up to that point, so their dna may already be in the hands of police.

I admit, I thought the husband is/was a viable suspect. Just because he was at the gym doesn't mean he didn't have anything to do with it, we have all seen the 48 Hours, etc...that brings it, literally, home again.

I suspect the press conference had to do with several other things. She is white. It is in a 'nice' neighborhood of Indy - which now says there is NO PLACE 'safe' in the city.

Something just doesn't feel right about this one. I hope the catch the bastard(s) who did this. Living in your home, living your life, should not be a reason to die.

Having the MCSO take a front-line role in this is good Democrat PR, but in the end will be a bad thing. John Layton and Mayor-elect Hogsett are using this crime to in essence de-merge the merger of 2007. That is something Layton has been working hard on since he was elected, and now this is a perfect opportunity for him to do such.

I was wondering why the sheriff was invited to this press conference. Did someone from the sex offender registry do this? Did the sheriff have some papers to serve at the house where this occurred?

Bottom line: This has nothing to do with the sheriff, so why was he there?

Maybe the jail he runs mistakenly released another inmate.

Burglaries happen everywhere these days thanks to meth addicts and other lowlife.

I thought the odd comment from the Husband was that bad things happen to good people because G-d must have had a good reason for allowing that bad behavior to take place.

Hate to tell the community this, the murder occurred last Tuesday. 6 days have passed without capture. I wish they would release the photo so the manhunt can begin and more people are not murdered/victimized.