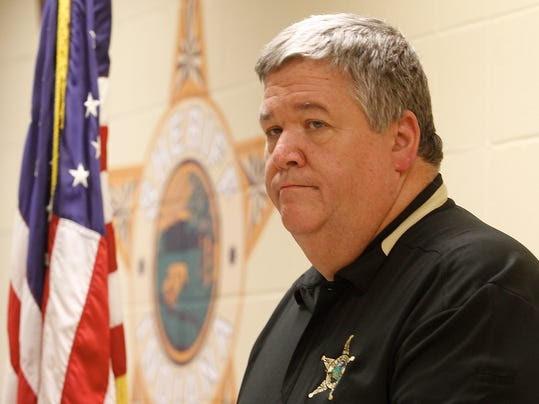 Yesterday, Clark Co. Sheriff Danny Rodden (D) resigned just two months after he faced a federal indictment that accused him of tampering with evidence and making false statements to FBI agents regarding his relationship with a prostitute at a Louisville hotel. Today, he pleaded guilty to three counts filed against him, including counseling in the destruction of evidence and two counts of providing false statements to law enforcement, in exchange for an agreement to dismiss other charges against him according to the Jeffersonville Evening News.

Under the stipulated facts of his plea agreement, Rodden admitted that he met with a prostitute in a hotel room at the Hyatt Regency Hotel on May 29, 2013 in which he paid $300 to the prostitute for oral sex and also provided the prostitute with a uniformed shirt and other clothing bearing the insignia of the Clark Co. Sheriff's Department. FBI agents interviewed Rodden in May of this year a short time after the prostitute agreed to become an informant for the agency. Rodden told the agent he never had sex with that woman or paid her for sex. Immediately after the interview, Rodden telephoned the prostitute and ordered her to dispose of the clothing bearing the sheriff's department insignia that he had given to her. During a subsequent interview with FBI agents in June, Rodden again lied about his relationship with the prostitute and denied he had her telephone number. Rodden's criminal defense team included high-profile Indianapolis attorney Jim Voyles and Larry "Trash Can" Wilder of Jeffersonville.

According to federal prosecutors, Rodden is likely to be sentenced between 10 and 16 months if the federal judge accepts the plea agreement. Rodden had been placed on administrative leave on July 30 following his indictment. A chief deputy who assumed his duties initially, John Kahafer, died unexpectedly on August 25 days after being hospitalized. Another deputy, Brian Meyer, became active sheriff. The Clark Co. Democratic Party will hold a caucus to select someone to fill out the remainder of Rodden's term, which ends this year. Meyer, the Democratic candidate on the November ballot, is expected to be chosen by the party to fill out the remainder of Rodden's term. Jamey Noel, the Clark Co. Republican Chairman, is the GOP candidate for sheriff this November. Rodden is the second Indiana sheriff to see his career end this year over a relationship with a prostitute. Boone Co. Sheriff Ken Campbell (R) resigned earlier this year for allegedly having a relationship with the very same prostitute who ended Rodden's career. No charges have been filed against Campbell.
Posted by Gary R. Welsh at 9:04 PM

As an attorney, perhaps you can discuss why one sheriff is not yet prosecuted. One wonders what the local Prosecutor and other buddies knew because Boone County had FBI and State Police involved before an investigation by Todd Meyers, Prosecutor and others. There were also damaging comments on this site from comments re: connections and cover-ups re: this matter for years.

Other question: how does this affect prosecutions, arrests and more of parties under these sheriff's terms of office? Bias? Cover-ups. Stay up on the Boone County investigation and this one as well.

The prostitute told investigators that Campbell did not pay to have sex with her unlike Rodden. It also didn't appear that Campbell lied about his relationship with the woman when he was questioned about it. Perhaps he didn't technically violate any criminal laws.

...another Democrat! Corruption is as corruption does.

The prostitute received weapons and more from Campbell. A detailed investigations is on going re: monies in the dept., trips, conventions, and more.

Compared to the scale of scumbaggery that occurs in Indianapolis, this case is peanuts.

It will be interesting to see if more fall. These two (Rodden and Campbell) were friends and buddies with a few central Indiana sheriff's.